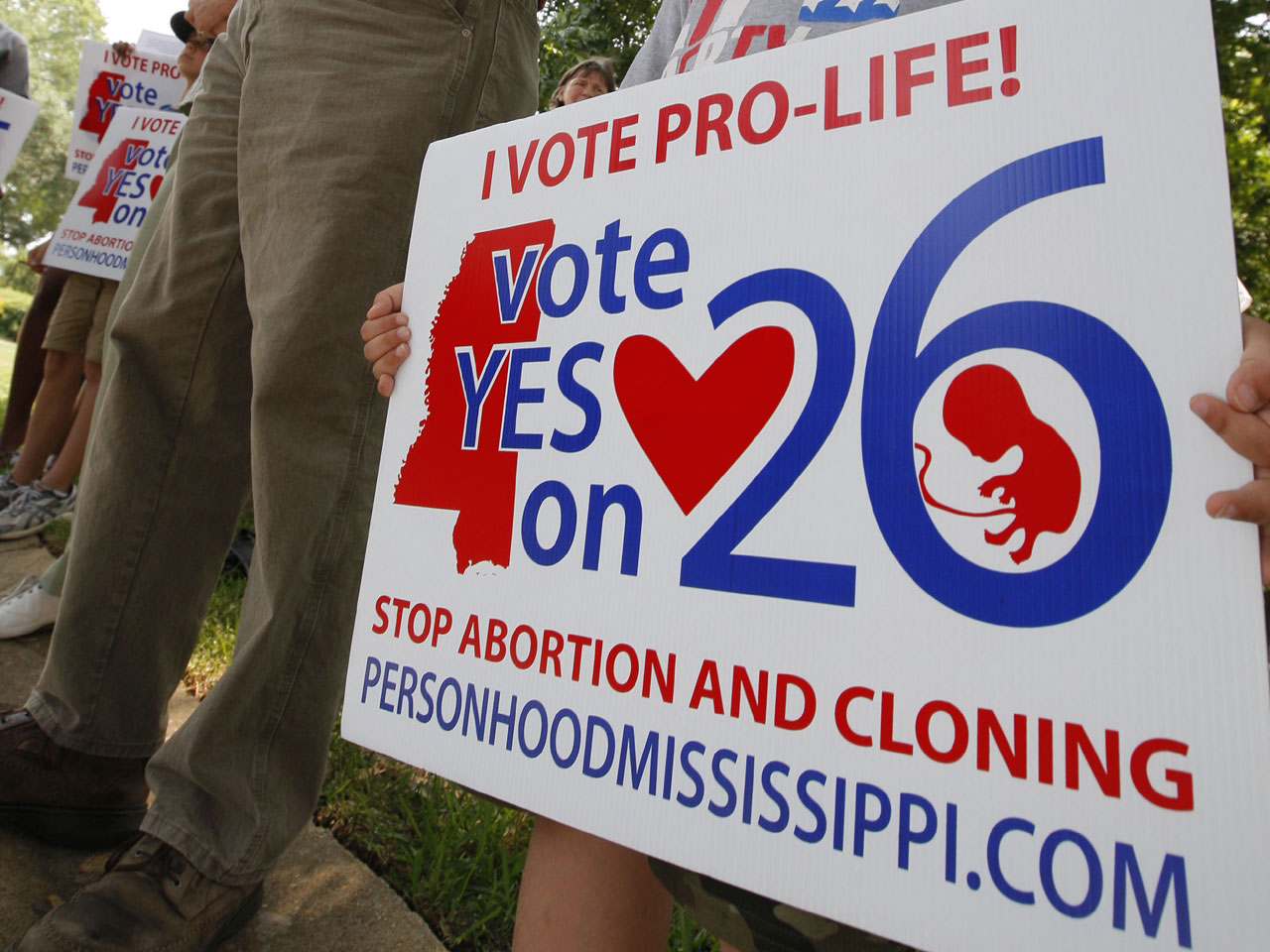 JACKSON, MISSISSIPPI - Les Riley draws on his religious convictions to explain why he led the petition drive that put Mississippi's "Personhood Amendment" on the state ballot.

Two years ago, Riley began collecting signatures for Statewide Initiative 26, which runs just twenty-one words: "Should the term 'person' be defined to include every human being from the moment of fertilization, cloning, or the equivalent thereof?"

The drive needed 89-thousand names to qualify for the ballot, and obtained 106,000 certified signatures.

As the citizen-sponsor of "Personhood," Riley says his motivation was love. "Because Christ loved me when I didn't deserve it, I love my neighbors, born, unborn, mothers, even our enemies."

Riley lives in the rural town of Hickory Flat, outside Tupelo, and has ten children with his wife - nine biological and one adopted. If you ask him whether the intent of "Personhood" is to outlaw all abortions, his answer is direct: Yes, with no exceptions.

When it comes to rape, Riley says, "We don't have the death penalty in Mississippi for rape. Why would we punish the rapist's child?" As for incest, he points to a recent case in Mississippi when a couple allegedly covered up a pregnancy caused by incest with an abortion. Riley says, "Was that girl protected by legal abortion or was she harmed further by it?"

"This initiative scares me to death," said Cristen Hemmins, a mother of three who lives in Oxford, Mississippi. She was raped at gunpoint 20 years ago on her college campus by two men who shot her in the back and leg as she ran away. Though hospitalized for weeks, she made a full recovery.

"People on the 'yes' side keep saying to me, 'Well, don't punish the baby, punish the rapist.' But what they leave out of that equation is me," Hemmins said in an interview. "If this had been in place, and I had gotten pregnant, I wouldn't have had any options. I would have been forced by the state government to bear a child, which might have killed me, physically, if not emotionally."

Hemmins, who joined Mississippians for Healthy Families, which opposes initiative 26, worries that if it passes, anti-abortion activists will persuade the state legislature to ban all abortions in Mississippi and certain forms of birth control, such as the so-called "morning after" pill.

"A lot of people on the 'yes' side think that if you get pregnant through rape that God meant for that to happen, and that you should carry it to full term, and having had three children, I know that pregnancy is no easy ride, and birthing is no easy ride," Hemmins said. "So the people who say that there are families lining up to adopt children, I point them to the 1,300 people that are in foster care today [in Mississippi]."

Mississippi's "Personhood Amendment" is part of a new national strategy to restrict a woman's ability to obtain a legal abortion. The measure has failed twice before in Colorado.

Activists are pursuing efforts to put the initiative on the ballot in at least nine other states next year, including the key presidential battlegrounds of Florida, Ohio, Wisconsin, and again, Colorado, as well as California, Montana, North Dakota, Arkansas, and Alabama, according to Keith Ashley, of Personhood USA.

"I lost my stomach for it," McMillan said in an interview. She believes human life begins at conception and is now president of Mississippi Pro-Life. "It is not ethical to kill a human being because they are inconvenient or unwanted or what we consider burdensome to us," she said.

Past anti-abortion campaigns in Mississippi have been successful. For example, a woman seeking an abortion is required to wait 24-hours after scheduling an appointment, and she must be given the opportunity to see her sonogram.

While there were once seven locations offering legal abortions, there is only one such clinic left in the state, in Jackson, the capital. In 1991, there were approximately 7,000 abortions annually in Mississippi; in 2008, there were less than 3,000, according to the Guttmacher Institute.

Dr. McMillan says, "The purpose of Amendment 26 is to recognize what is biologically and scientifically true -- that human life begins at the moment of fertilization and has personhood from that moment and should be protected by the law like we protect our newborn babies."

But the Mississippi Medical Association opposes "Personhood" because, doctors say, it would bring unprecedented government interference with their work. Infertility specialist Randall Hines says the amendment is based on flawed science.

"Only about 20 percent of fertilized eggs, actually, go on to become children," Hines said in an interview. "I think to suggest that legal rights should be given to every fertilized egg is a mistake."

Dr. Hines fears enforcement of the amendment could rein in standard medical practices, such as surgical and pharmaceutical treatment for an ectopic pregnancy, when a fertilized egg grows outside a woman's uterus, typically in the fallopian tube.

"If that pregnancy continues to grow, it can rupture and kill the woman," Hines said. "By ending the life of the ectopic pregnancy, I would be committing homicide."

One of Hines' patients is Atlee Breeland, from Brandon, Miss., who was once diagnosed with infertility and used in-vitro fertilization to conceive her twin girls, now five-years-old.

"When I want medical advice, I want to get that from my doctor. I don't necessarily think that the legislature and the judges of the Mississippi are in the best position and have the best background to decide how my physician ought to practice medicine," Breeland said.

Breeland founded Parents Against 26, worried that the amendment could roll back medical options at home. "I don't want Mississippians to have to go Washington, DC or New York or California to have infertility treatment. I want to get treated for my disease right here."

It may comes as a surprise that a church that teaches "life begins at conception" appears neutral on "Personhood." But Roman Catholic Bishop Joseph Latino, head of the diocese of Jackson, said in an interview, "We have neither condemned, nor have we sponsored the amendment."

Still, "Personhood" proponents, like Terri Herring, see an opportunity to outlaw all abortions in Mississippi now.

"Will America step to the plate and begin to frame its laws in such a way that we protect unborn children?" Herring said in an interview. "We can say that there are times when an egg does not implant, but I think there's a difference in whether that child is conceived and intentionally destroyed versus nature takes its course."

Sponsor Les Riley and "Personhood" backers say they reject old legal arguments about when a fetus is viable. After all, he asked, can a newborn live without a mother or could a two-year-old live in the woods by herself with nobody to take care of her?

"When 23 chromosomes from your mother, 23 from your father, came together and created a unique DNA molecule," Riley said, "you were exactly the person you are now, and nothing has been added to you except time and food."