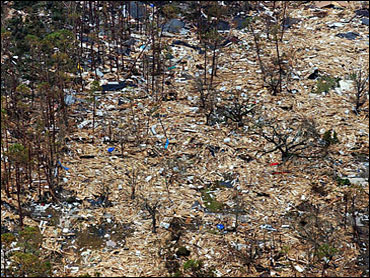 As officials say that every structure up to a half mile inland from Mississippi's shore was obliterated by Hurricane Katrina, word comes of a small town that seems to have felt Katrina's wrath hardest.

The storm virtually wiped Waveland, Miss., off the map, prompting state officials to say it took a harder hit from the wind and water than any other town along the coast.

Rescue workers there Wednesday found shell-shocked survivors scavenging what they could from homes and businesses that were completely washed away. The air smelled of natural gas, lumber and rotting flesh.

"Total devastation. There's nothing left," said Brian Mollere, a resident who was left cut and bruised. Katrina tore his clothes off and he had to dig in the debris for shorts and a T-shirt.

The town of 7,000 about 35 miles east of New Orleans has been partially cut off because the U.S. 90 bridge over the Bay of St. Louis was destroyed. There is no power, no phones, no way out — and nowhere to go.

And looting isn't only a problem in New Orleans, Smith reports. All along the coast, especially in areas hit hardest by Hurricane Katrina, looters are taking goods.

In Waveland, Katrina dragged away nearly every home and business within a half mile of the beach, leaving driveways and walkways to nowhere. The water scattered random reminders of what had been normal, quiet lives: family photos, Barbie dolls, jazz records, whiskey bottles.

State officials are now estimating that 90 percent of the structures from the shoreline to one half-mile inland are totally destroyed, CBS News correspondent Jim Acosta reports.

Hurricane Katrina has spread the suffering among the rich and poor alike, turning waterfront mansions along the Gulf Coast into million-dollar junkyards.

Homes along Beach Boulevard in Pascagoula, Miss., are now little more than concrete slabs heaped high with debris. One woman says she and her husband are digging through the rubble of their place, hoping to find the family silver.

A neighbor says Senator Trent Lott's home was among those hit. He says there's nothing left.

Gov. Haley Barbour tells the Early Show's Harry Smith that "The streets are totally covered with lumber, debris, shingles, furniture and clothes so that you can't see any asphalt for miles around."

It is the total destruction of certain areas of Mississippi that is overwhelming rescue workers, Barbour told CBS.

A woman stocking up at one of the few grocery stores still open in Pascagoula bought some bleach, salt, detergent and a six-pack of Red Dog beer. And she says if she had a whole case, she'd drink it, too.

All over the state, rescue teams continued efforts to find survivors and survey the damage. Ambulances roamed through the passable streets of devastated places such as Biloxi, Gulfport, Waveland and Bay St. Louis, in some cases speeding past corpses in hopes of saving people trapped in flooded and crumbled buildings.

Tempers were beginning to flare in the aftermath of the storm. Police said a man fatally shot his sister in the head over a bag of ice in Hattiesburg, Miss.

President Bush flew over New Orleans and parts of Mississippi's hurricane-blasted coastline in Air Force One. Turning to his aides, he said: "It's totally wiped out ... it's devastating, it's got to be doubly devastating on the ground."

State officials would not confirm a death toll in Waveland, but Mayor Tommy Longo estimated that at least 50 residents died, The Clarion-Ledger reported. City Hall is gone, with nothing but a knee-high mural of a beach scene still standing.

Although the hurricane dealt Mississippi's economy an immediate blow, the effects will be felt long-term, experts say. When Mississippi gets around to rebuilding its heavily-damaged casino industry, for instance, there are predictions they'll be placed on dry land. Questions are now being asked whether the law that required that they float also spelled doom.

The head of the state's gaming group says the issue will be key for lawmakers when they return for the next legislative session.

More than half of the 13 casinos in Biloxi, Gulfport and Bay St. Louis were destroyed by Hurricane Katrina.

Along with tax revenues, the casinos were a source of jobs. Before the storm, about 14,000 people worked in the casinos along the Mississippi coastline. Each casino had a land-based hotel, and thousands more employees worked in those.

Mollere, a resident of obliterated Waveland, had set up camp on the wreckage where his family's two-story home and jewelry store once stood. A couple of chairs and a sheet of plastic protected him and his dog from the sun and spits of rain.

Mollere doesn't usually smoke, but he sucked on a Kool menthol and collected bottles of whiskey and Barq's root beer that had washed up nearby.

He recalled swimming out of the store with the dog as the water rose and finding shelter in a house that survived. "If it had been night, I would have drowned," he said.

His 80-year-old mother did drown in the storm. She had evacuated with some family to a grocery store in neighboring Bay St. Louis. As her family members swam away to escape the storm, his mother, who used an oxygen tank, stayed behind.

Mollere's father was a local folk hero for being one of the few people to stay behind in Waveland during Hurricane Camille in 1969. The elder Mollere swam along and grabbed onto a white horse, and both were saved.

On Wednesday, Jim Clack held the hand of his elderly mother, Mercedes Clack, and led her through the rubble of her Waveland home.

Mercedes Clack, blocking the glare with wraparound sunglasses, said of her splintered home: "Oh, that was a beautiful house. Remember it?"

She brightened when she found an antique radio and a few of her jazz records. "Do you think they can be salvaged?" she asked her son.

Other sweaty, mud-caked survivors camped out in shopping center parking lots in Waveland and neighboring Bay St. Louis, some using tents or mattresses they had been taken from stores. People lined up to get ice and bottled water distributed by emergency workers.

"We're in trouble for a long time," said Shannon Whavers, 29.

"What are you going to do?" said her 30-year-old husband. "We saw a guy just lying in the highway, not knowing where to go."