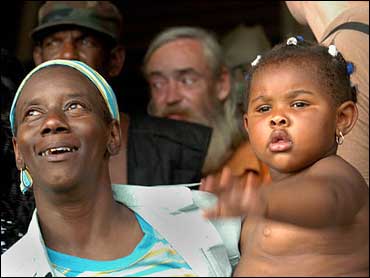 Thousands more bedraggled refugees were bused and airlifted to salvation Saturday, leaving the heart of New Orleans to the dead and dying, the elderly and frail stranded too many days without food, water or medical care.

Meanwhile, President Bush ordered more than 7,000 active duty forces to the Gulf Coast on Saturday, as the Bush administration intensified efforts to rescue survivors and send aid to the hurricane-ravaged Gulf Coast in the face of criticism it did not act quickly enough.

"In America, we do not abandon our fellow citizens in their hour of need,'" President Bush said.

Already, the Coast Guard has rescued 9,500 people in addition to the thousands and thousands aided by local authorities, Homeland Security Secretary Michael Chertoff said at a news conference. More than 100,000 people already had received humanitarian aid, he said.

No one knows how many were killed by Hurricane Katrina's floods and how many more succumbed waiting to be rescued. But the bodies are everywhere: hidden in attics, floating among the ruined city, crumpled on wheelchairs, abandoned on highways.

And the dying goes on — at the convention center and an airport triage center, where bodies were kept in a refrigerated truck.

Gov. Kathleen Blanco said Saturday that she expected the death toll to reach the thousands. And Craig Vanderwagen, rear admiral of the U.S. Public Health Service, said one morgue alone, at a St. Gabriel prison, expected 1,000 to 2,000 bodies.

Most were those too sick or weak to survive. But not all.

Charles Womack, a 30-year-old roofer, said he saw one man beaten to death and another commit suicide at the Superdome. Womack was beaten with a pipe and being treated at the airport triage center.

"One guy jumped off a balcony. I saw him do it. He was talking to a lady about it. He said it reminded him of the war and he couldn't leave," he said.

CBS News Correspondent John Roberts reports that the National Guard made a substantial dent in the 30,000 storm victims who'd lived in squalor at Convention Center.

"We should all go to heaven because I feel like we've lived though hell," one woman said.

Capt. Joel Lynch just got back from a tour of duty in Iraq.

"It wasn't that bad in Baghdad," he told Roberts.

Some 20,000 refugees had been waiting for rescue for nearly a week at the Superdome, with as many as 25,000 more at the New Orleans convention center. National Guard Lt. Col. Bernard McLaughlin said the number may have been closer to 5,000 to 7,000. Most were finally taken out by bus and helicopter on Saturday.

Nearby, a woman lay dead in a wheelchair on the front steps. A man was covered in a black drape with a dry line of blood running to the gutter, where it had pooled. Another had lain on a chaise lounge for four days, his stocking feet peeking out from under a quilt.

A once-vibrant city of 480,000 people, overtaken just days ago by floods, looting, rape and arson, was now an empty, sodden tomb.

The overwhelming majority of those stranded in the post-Katrina chaos were those without the resources to escape — and, overwhelmingly, they were black.

"The first few days were a natural disaster. The last four days were a man-made disaster," said Phillip Holt, 51, who was rescued from his home Saturday with his partner and three of their aging Chihuahuas. They left a fourth behind they couldn't grab in time.

Tens of thousands of people had been evacuated from the city, and Texas Gov. Rick Perry said as many as 120,000 hurricane refugees were in 97 shelters across the state, with another 100,000 in Texas hotels and motels. Others were in Tennessee, Indiana and Arkansas.

Emergency workers at the Astrodome were told to expect 10,000 new arrivals daily for the next three days.

Thousands of people remained at Louis Armstrong New Orleans International Airport, where officials turned a Delta Blue terminal into a triage unit. Officials said 3,000 to 5,000 people had been treated at the triage unit, but fewer than 200 remain. Others throughout the airport awaited transport out of the city.

"In the beginning it was like trying to lasso an octopus. When we got here it was overwhelming," said Jake Jacoby, a physician helping run the center.

Airport director Roy Williams said about 30 people had died, some of them elderly and ill. The bodies were being kept in refrigerated trucks as a temporary morgue.

At the convention center, people stumbled toward the helicopters, dehydrated and nearly passing out from exhaustion. Many had to be carried by National Guard troops and police on stretchers. And some were being pushed up the street on office chairs and on dollies.

Nita LaGarde, 105, was pushed down the street in her wheelchair as her nurse's 5-year-old granddaughter, Tanisha Blevin, held her hand. The pair spent two days in an attic, two days on an interstate island and the last four days on the pavement in front of the convention center.

"They're good to see," LaGarde said, with remarkable gusto as she waited to be loaded onto a gray Marine helicopter. She said they were sent by God. "Whatever He has for you, He'll take care of you. He'll sure take care of you."

LaGarde's nurse, Ernestine Dangerfield, 60, said LaGarde had not had a clean adult diaper in more than two days. "I just want to get somewhere where I can get her nice and clean," she said.

Around the corner, a motley fleet of luxury tour buses and yellow school buses lined up two deep to pick up some of the healthier refugees. National Guardsmen confiscated a gun, knives and letter openers from people before they got on the buses.

"It's been a long time coming," Derek Dabon, 29, said as he waited to pass through a guard checkpoint. "There's no way I'm coming back. To what? That don't make sense. I'm going to start a new life."

Hillary Snowton, 40, sat on the sidewalk outside with a piece of white sheet tied around his face like a bandanna as he stared at a body that had been lying on a chaise lounge for four days, its stocking feet peeking out from under a quilt.

"It's for the smell of the dead body," he said of the sheet. His brother-in-law, Octave Carter, 42, said it has been "every day, every morning, breakfast lunch and dinner looking at it."

When asked why he didn't move further away from the corpse, Carter replied, "it stinks everywhere, Blood."

Dan Craig, director of recovery at the Federal Emergency Management Agency, said it could take up to six months to get the water out of New Orleans, and the city would then need to dry out, which could take up to three more months.

A Saks Fifth Avenue store billowed smoke Saturday, as did rows of warehouses on the east bank of the Mississippi River, where corrugated roofs buckled and tiny explosions erupted. Gunfire — almost two dozen shots — broke out in the French Quarter overnight.

In the French Quarter, some residents refused or did not know how to get out. Some holed up with guns.

As the warehouse district burned, Ron Seitzer, 61, washed his dirty laundry in the even dirtier waters of the Mississippi River and said he didn't know how much longer he could stay without water or power, surrounded by looters.

"I've never even had a nightmare or a beautiful dream about this," he said as he watched the warehouses burn. "People are just not themselves."