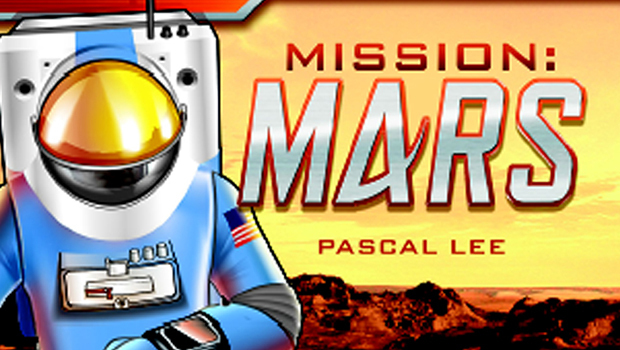 As a child, Dr. Pascal Lee read all kinds of books about going to the moon. He learned what the astronauts would wear and was fascinated to see the inner workings of the spaceships.

The books inspired Lee to pursue a career in space science. Today, he is the chairman of the Mars Institute and a planetary scientist at the SETI Institute. When he speaks with his NASA colleagues, so many have similar memories of reading children's books about the Apollo missions.

"It's remarkable how many people I run into in this space field who give credit to the Apollo program, and all the books and the things that went along with it, for inspiring them," he told CBSNews.com.

"To me, going to Mars is our next Apollo. Meanwhile there's no book out there for kids that even attempts to show how a mission would be put together, what a spacecraft would look like, what people would wear."

There are plenty of children's books about Mars, he explained, but most are fictional stories about living on the Martian planet. He wanted children to have a book that explained a mission to Mars in the way that earlier generations understood the missions to the moon. So, he decided to write one.

"MISSION: MARS," launched in the Scholastic Reading Club this week. It will be available at bookstores nationwide on Nov. 1.

Geared towards 9 to 12-year-olds, "MISSION: MARS" takes young readers on a realistic, six-phase mission to the Red Planet. It's a manual of sorts, complete with test missions and quizzes. Much of the content is drawn from Lee's own "field notes" and NASA's conceptual drawings.

In Phase One, they learn about the science of the planet, why it is always cold and what makes it red. From there, they learn how to get there, what spacecraft they'll need, how the spacecraft work. They learn about the spacesuits they'll be wearing and the geography they'll be exploring once they land. By the end, they ponder what the future holds for Mars -- should it be treated as another Earth?

Along with the book, Lee created a series of videos to explain some popular questions about Mars, like "Are there aliens on Mars?" Most of these "field report" videos were shot at the NASA Haughton-Mars project base in the Arctic.

"The real hope from this book is not to turn them into Mars experts," Lee said. "It is to make them embrace science and realize that space exploration is not just for rocket scientists and geeks, it's something that they can aspire to and be part of."

Already, the book has inspired one of the men who originally inspired Lee.

"Pascal Lee is a true pioneer of Mars exploration," Apollo 11 astronaut Buzz Aldrin said in a press release. "This book makes me want to put on a space suit and go to Mars!"

Kids growing up today will likely have that opportunity. NASA is planning to send a manned mission to Mars by 2035.

"My dream is that this book might be taken to Mars by one of these kids," said Lee.