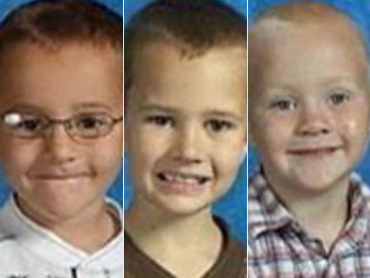 (CBS/WWJ/AP) ADRIAN, Mich. - John Skelton, a southern Michigan man whose three sons have been missing since Thanksgiving, has been sentenced to 10 to 15 years in prison on a charge of unlawful imprisonment.

Skelton appeared Thursday in Lenawee County Circuit Court in Adrian. He told Judge Margaret Noe he loves the boys and has cried daily since their disappearance.

Noe told Skelton his "explanations have been ridiculous."

Skelton pleaded no contest in July and later said he did so hoping he'd eventually be freed and able to see his sons again. Prosecutors dropped kidnapping charges.

Andrew, Alexander and Tanner Skelton were last seen at Skelton's home, 70 miles southwest of Detroit near the Ohio state line.They were 9, 7 and 5 years old at the time.

The boys had gone to stay with Skelton for Thanksgiving under an agreement with his then-estranged wife, Tanya Skelton, who had exclusive custody of the children. He was supposed to return the boys to their mother after the holiday. Skelton has told police and a judge that the boys were given to an organization, but investigators don't believe him. The Skeltons are now divorced, reports CBS station WWJ.

Missing Children: Where are They?