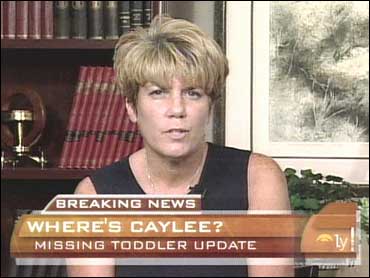 The grandmother of a missing 2-year-old Orlando girl said that she believes her daughter does not know where her missing granddaughter is.

Casey Anthony, 22, is being held on $500,000 bond after investigators said she lied to them and did not report daughter Caylee Marie Anthony missing for more than a month.

Appearing on CBS' The Early Show, Cindy Anthony, the mother of Casey Anthony and grandmother of Caylee, said that her daughter had requested a sketch composite artist to do a drawing of the person she says took her daughter.

"She is saying that she will speak to authorities like the FBI," Anthony said. "She has been trying to cooperate. She has not changed her story. She maintains that she knows who has Caylee, but does not know where Caylee is, and I would like to make sure that this is set straight."

Anthony criticized what she called distortions in reports of Casey allegedly changing her story, or not cooperating with police.

"The first 24, 48 hours were very … we were all in shock and very frustrated," she said. "It's been reported she is not cooperating, does not want to speak with police. We were told we had to wait to speak to our daughter; we found out yesterday we could have spoken to her Wednesday or Thursday of last week.

"I'm not sure why people are doing what they want, but what I want is the media to report responsibly … because what we don't want to take away from all of this is that there is a missing child. That is a fact."

Anthony also criticized authorities who said that the person her daughter claimed kidnapped Caylee does not exist.

Her comments followed Friday's release by the Orange County Corrections Department of a July 16 call from jail between Cindy Anthony and her daughter.

In the call, Cindy Anthony complained to her daughter that she wasn't telling her where the toddler was. Casey Anthony responded angrily that she didn't know where the girl was.

"Are you kidding me?" Casey Anthony said.

Cindy responded, "Don't waste your call to scream and holler at me."

She added that her daughter's incarceration is her own fault.

"You're blaming me that you're sitting in the jail? Blame yourself for telling lies," Cindy Anthony said.

Prosecutors said in court earlier this week that Casey Anthony is a person of interest in what is beginning to look like a homicide investigation, though she has not been charged. Sheriff's deputies testified that her car smelled of decomposition, and a cadaver-trained dog noted a smell of human remains there.

Early Show anchor Chris Wragge asked Anthony, who he said has been very supportive of her daughter through many interviews with the press, about the recording of her telephone call released by the police: "It sounded like you're intimating maybe your daughter's not telling the truth and not being forward with authorities. Do you now believe she has been 100% forward with authorities and that you do believe everything she's saying?"

"I've said this over and over again: We all were in shock over my granddaughter being missing," she told Wragge. "Casey has maintained her story all along, that Caylee was kidnapped. That's the first thing she stated when the authorities arrived. She told me over the last month that the baby-sitter had her on many occasions when I asked if I could speak with my granddaughter. She made excuses for a reason, because she was trying in her own way to plead with this person.

"I asked her yesterday, while I spoke with her, 'Is there a message for this person?' And she said, 'Yes. I forgive you, and will you, please return Caylee?'"

Anthony also said her daughter had a message for her granddaughter: "Her message to Caylee is, 'Mommy loves you so much. Continue to be brave, because we know you are coming home to all of us. We love you dearly.'

"I was in shock did not know what to believe, and when I can step back and look at facts, I know what I believe."

In the same call, Casey Anthony said calling her family was a waste of time and told an unidentified female the family isn't supporting her.

Cindy Anthony called 911 on July 15. In one call, she asked police to arrest Casey Anthony for stealing a car and money.

She told a dispatcher that she had just found Casey, who had been missing for a month, as well as the car she was driving, which had been towed. She also expressed concern that her granddaughter was not with Casey.

She called 911 again about an hour later, crying, after she said Casey Anthony finally told her Caylee had been missing for a month.