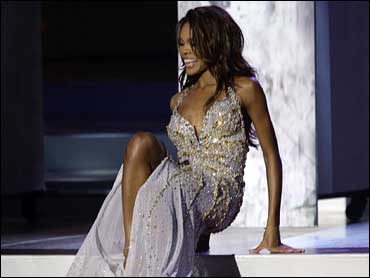 Miss Venezuela was crowned Miss Universe 2008 on Monday in a contest marked by the spectacle of Miss USA falling down during the evening gown competition for the second year in a row.

The new Miss Universe, Dayana Mendoza, was once kidnapped in her homeland and says the experience taught her to remain poised under pressure.

Tension got under the skin of Miss USA, Crystle Stewart of Texas, who tripped on the train of her bejeweled evening gown as she made her entrance.

During the 2007 Miss Universe contest in Mexico City, Miss USA Rachel Smith also tumbled during the evening gown competition and became an unintended star on YouTube, where the video was shown over and over again.

At a news conference after this year's event, a beaming Mendoza said she wasn't yet sure where her upcoming year of whirlwind appearances would take her. But after a quick stop in New York, she wants to see her family again, enjoy some of her mom's home cooking and give everyone hugs.

In the meantime, Mendoza said, she is simply looking forward to taking off her high-heeled shoes and massaging her feet.

She declined to discuss her kidnapping, which occurred a year and a half ago, but took advantage of the occasion to call for global peace.

"I want to raise my voice and tell the world that violence is not the answer," she said.

Mendoza, 22, is a 5-foot, 10-inch, green-eyed beauty who enjoys learning languages and photography. She appeared at the news conference in the flowing yellow dress and dangling turquoise earrings that she wore during the evening gown competition in which Stewart took her spill.

Stewart, 26, is a motivational speaker and former track and field star who is working on a book called "Waiting to Win." The Houston native plans to open a character-development school for young children and has worked with students with autism in the Texas schools.

During a weekend interview with the Associated Press, Stewart said she felt very confident going into the show and couldn't imagine experiencing the same calamity as her predecessor.

"All I can offer to the world and to America is to do my best," Stewart said. "Nerves don't play a part in this." 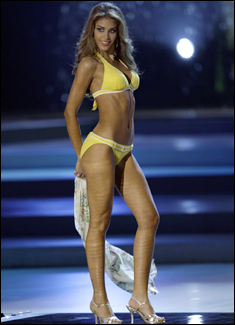 Miss Thailand won the prize for best national costume and Miss El Salvador was chosen by her peers as Miss Congeniality.

The NBC show was hosted by talk show star Jerry Springer and Spice Girl Melanie Brown and broadcast live to hundreds of millions of viewers in 170 countries.

The tuxedoed Springer made a grand entrance on a motorbike - the vehicle of choice in Vietnam, where the streets are teeming with millions of the speeding two-wheelers.

Sporting yellow, green and orange bikinis, the 15 semifinalists strutted across the stage during the swimsuit competition to the sounds of Lady Gaga, who belted out the pulsating "Just Dance" in a platinum blond wig. Miss Vietnam, Lam Thuy Nguyen, was greeted with a roar from the Vietnamese audience.

The final 10 then competed in the evening gown event.

They performed in front of a panel of judges that included international fashion experts and Donald Trump Jr., whose father, the real estate magnate and TV star, co-owns the pageant with NBC.

This year's contestants spanned a wide range of experiences and aspirations.

Miss Albania was a professional basketball player. Miss Argentina says she has paranormal experiences. Miss Antigua & Barbuda is fascinated by snakes. Miss Angola was in a plane crash while trying to escape a conflict during her country's civil war.