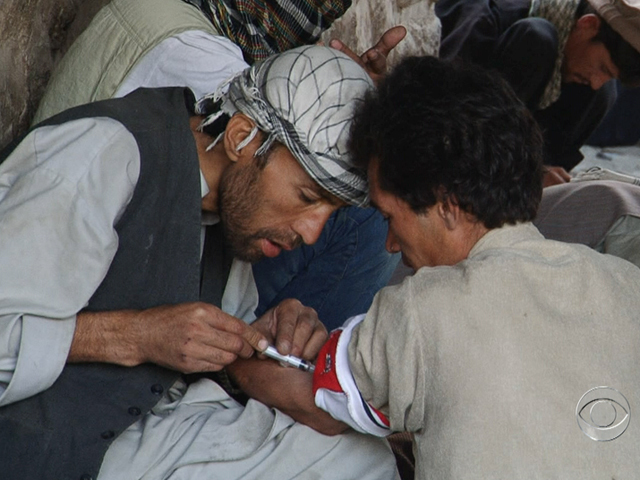 U.N. Secretary General Ban ki-moon said Thursday that Afghanistan will never be stable unless it tackles its drug problem. He spoke at an international conference in Vienna.

Ninety percent of the world's opium originates in Afghanistan's poppy fields -- and much of that is turned into heroin. CBS News contributor Willem Marx took a look at the problem.

Beneath a notorious bridge in downtown Kabul, a human tragedy festers. For more than a year now, hundreds of heroin addicts have lived there -- an ancient opium den in a modern urban sewer. Thousands more drop in each day to buy, smoke and inject their daily fix.

"How do you react when you see that level of misery?" Marx asked Jean-Luc Lemahieu, who heads the U.N. Office on Drugs and Crime for Afghanistan.

"Appalling, appalling," he said. "And even more appalling, it is happening just below and in front of us."

Lemahieu said with ever more users injecting their drugs, there's a troubling new statistic. Around 1 in 14 of Afghanistan's drug users is now believed to be HIV positive. And with addicts sharing needles, that number is soaring.

This is how an HIV epidemic brews. We watched as men reused bloody syringes again and again -- so many, that we had to walk carefully among the addicts for fear of treading on an errant needle.

"Each day my life was getting worse and worse," said Abdulrahim Rejee, a former heroin user who crawled out of this despair a year ago. Today he lives with nine other recovering addicts in a shared home.

Abdulrahim credits a pilot program involving methadone, a heroin substitute that requires no needles. It is widely viewed as the best defense against the spread of HIV here.

"I feel my life has changed 100 percent," he said. "I have rejoined my family, and I feel very healthy."

But methadone is available for just a fraction of Afghanistan's addicts -- Abdulrahim and 70 others.

"We need to expand the delivery of that service to a lot more addicts than what we are able to do today," said Lemahieu.

The only other option here is to go cold turkey at a detox clinic. Under the bridge one morning, Marx saw an addict collapse from an overdose. Abdulrahim jumped in to resuscitate the struggling man.

"When I go to that bridge," Abdulrahim told Marx, "I want to help those people, that they can live like me."

The man barely survived barely, But with limited care available, he lived only to shoot up another day. This misery persists, while a deadly virus continues to spread.