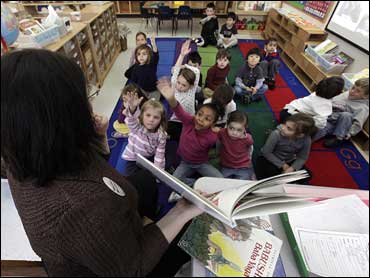 Roughly one-fourth of the children in U.S. kindergartens are Hispanic, evidence of an accelerating trend that now will see minority children become the majority by 2023.

Census data released Thursday also show that Hispanics make up about one-fifth of all K-12 pupils, those in kindergarten through 12th grade. Schools in most U.S. states have 12 grades. Hispanics' growth and changes in the youth population are certain to influence political debate for years about jobs, immigration and education.

The ethnic shifts in school enrollment are most evident in the American West. States such as Arizona, California and Nevada are seeing an influx of Hispanics due to both immigration and higher birth rates than other ethnic groups.

In 2007, more than 40 percent of all students in K-12 were minorities - Hispanics, blacks, Asian-Americans and others. That is double the percentage of three decades ago.

In colleges, Hispanics constitute 12 percent of full-time undergraduate and graduate students, 2 percent more than in 2006. Still, that is short of Hispanics' 15 percent representation in the total U.S. population.

"The future of our education system depends on how we can advance Hispanics through the ranks," said William Frey, a demographer at the Brookings Institution in Washington. "In many cases it's going to be a challenge, because they are the children of immigrants, and their English is not as strong. Many have parents without a high school or college education."

Minorities are projected to become the majority of the overall U.S. population by 2042. For minority children, that shift is seen coming in 2023, seven years earlier than was estimated as recently as 2004. The accelerated timetable is due to immigration among Hispanics and Asians, and declining birth rates among non-Hispanic whites.

Hispanics account for more than 23 percent of kindergartners in private and public schools, according to 2007 data. That is more than triple Hispanics' percentage in the 1970s, the height of white baby boom enrollment in elementary and high school.

More Hispanic kindergartners in 2007 were U.S.-born than foreign-born, assuring them of citizenship that will make them eligible to vote by 2020.

Mr. Obama, who took two-thirds of the Hispanic vote, is channeling billions of federal dollars to improve schools, reduce the dropout rate and make college more affordable by increasing the maximum Pell Grant, a federal subsidy for low-income students, to $5,550.

Yet his administration has been sketchy when it comes to improving classroom performance and overhauling the former Bush administration's No Child Left Behind Act. It sets goals for schools that are supposed to have every student reading and doing math at grade level by 2014.

The education law has major implications for both black and Hispanic students, including those who speak English as a second language, because they tend to lag behind whites in reading and math scores.

Obama has been largely quiet on immigration reform, which could pave the way for citizenship for nearly 12 million illegal immigrants.

Richard Fry, a senior researcher at the Pew Hispanic Center, said Hispanic growth cannot be ignored in policy debates for too long. While in recent elections Hispanics have cast only 6 percent of the total ballots, "Latinos' electoral power and participation levels clearly are going to grow," Fry said.

Other findings from the data: