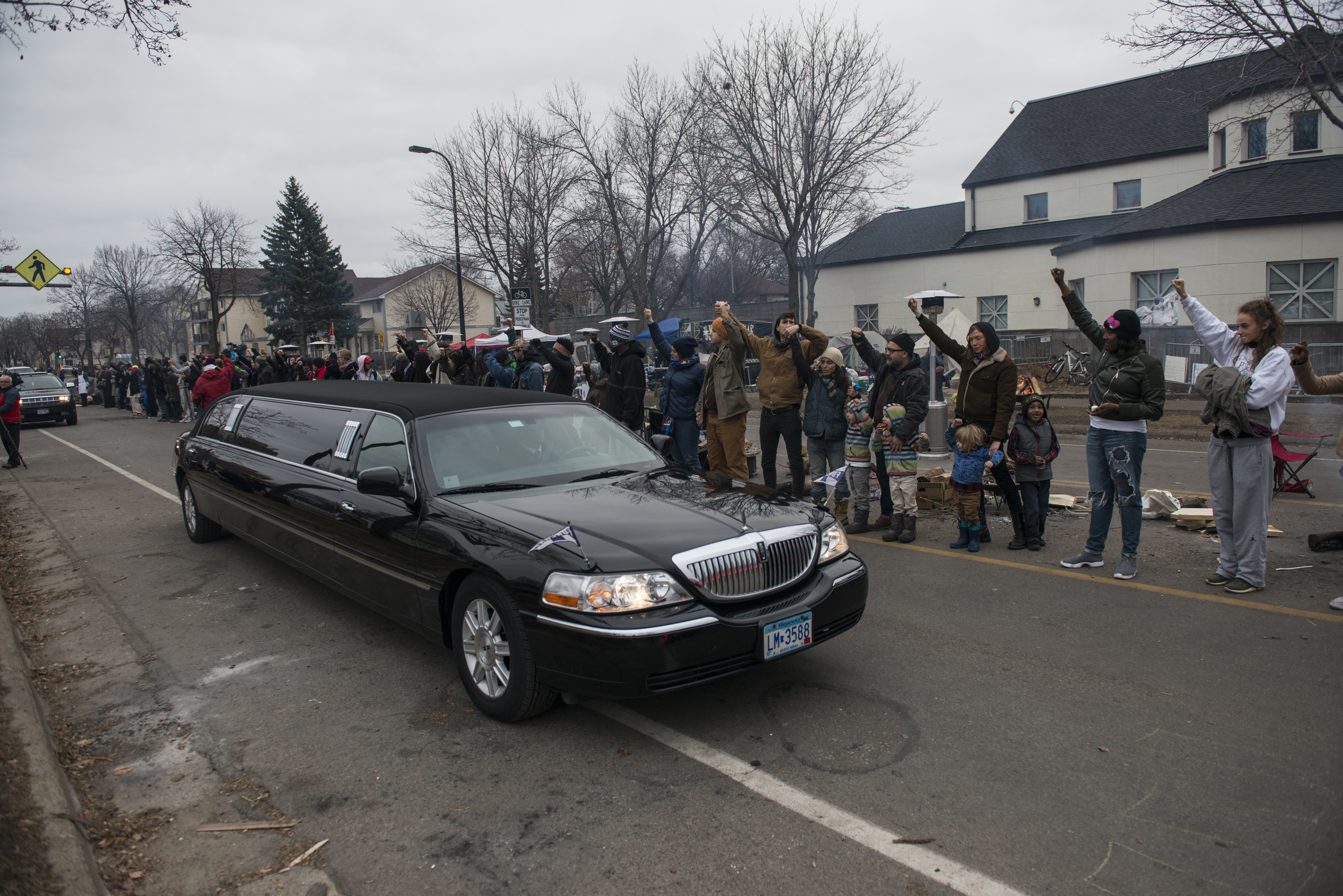 MINNEAPOLIS -- Hundreds of people filled a Minneapolis church on Wednesday for the funeral of a black man whose death in a confrontation with police has sparked days of ongoing protests, while charges were pending against four men suspected in a shooting that wounded several of the protesters.

Impassioned speeches from pastors and Jamar Clark's relatives were occasionally interrupted by shouts and applause inside the cavernous Shiloh Temple International Ministries. Several relatives wore white T-shirts that read, "I matter," with Clark's picture on the back.

Programs also adorned with a photo of Clark described the 24-year-old as a man who "liked to swim, fish, listen to music, play basketball, be with family and take trips to Charlotte, North Carolina."

"I'm still hurt," his sister, Sharice Burns, told the packed church on the city's north side. "I'm still suffering. We need justice sooner rather than later."

Clark was shot on Nov. 15 in what police say was a scuffle with officers responding to an assault of a woman in which he was a suspect. Some community members who say they saw the incident allege Clark was handcuffed when he was shot, which police have disputed. State and federal investigations are underway.

Bishop Richard Howell praised protesters for pressure that he said helped get a federal criminal civil rights investigation and the names of the officers involved. Howell said what's needed now is a special state legislative session to address the needs of Minnesota's minority community.

"Jamar, your life did and does have purpose," he said to a standing ovation. "Your death is not in vain."

The funeral procession went past the 4th Precinct police station, where supporters of the Black Lives Matters movement, which evolved in the wake of the shooting death of 18-year-old Michael Brown in Ferguson, Mo., and others have been camped out for days. Vehicles in the procession honked their horns, and protesters shouted "Justice for Jamar."

Police have arrested four men -- ages 27, 26, 23 and 21 -- on suspicion of shooting five protesters after some protesters told the men to leave the site Monday night. Police said three of the men are white and the fourth is Asian.

Court documents indicate the 23-year-old suspect called an old high school friend who is a Mankato police officer and confessed to shooting the protesters. The confession was described in an application for a search warrant filed in Hennepin County court, the Star Tribune reported Wednesday night.

According to the documents, the suspect, who is white, told the officer that he and some friends went to the protest to livestream it when the altercation broke out, leading to the shooting. Authorities raided the man's Bloomington home and seized a dozen weapons. The Minneapolis Star-Tribune and local television stations have identified the suspect as 23-year-old Allen Lawrence Scarsella.

The car full of white men would often shoot video of the protests. On Monday night, something changed. CBS Minnesota reporter Lorena Delacuesta said she sensed trouble just before the shooting began at the protest.

"These three guys come, three white men, covering their faces and they started arguing with the protesters," Delacuesta said.

Wesley Martin was among the protesters who escorted them away. Suddenly, shots rang out.

"I heard the N word and that's when everybody started charging," he said. "And we get to 14th and Morgan [avenues], and all I heard was pow...pow, pow, pow, pow, pow."

Martin was shot in the leg, and his brother was also hit.

The shootings spurred a massive march Tuesday evening, with a racially mixed crowd marching more than 2 miles to City Hall and back. Hundreds of demonstrators milled quietly around portable fire pits to share coffee, pizza and doughnuts as music played.

In the wake of the shootings, Clark's family asked for protesters to end the encampment out of safety concerns, and U.S. Rep. Keith Ellison said it would be wise to "start thinking about an exit strategy" and what to do next.

Steven Belton, interim president of the Minneapolis Urban League, echoed those sentiments, saying protesters had achieved most of what they wanted. Belton said the vigil should end to "restore order" to the community, which he said has endured open gunfire, traffic and service interruptions, smoke from the protesters' fires and hours of helicopter noise.

That likely won't happen, said Jayme Ali, a pastor at God of All Truth Church. Outside the funeral, as mourners streamed past, Ali said another rally was planned. Protesters have demanded investigators release video of the Clark shooting, and Ali noted it took more than a year before Chicago on Tuesday released video of the fatal police shooting of a black teenager.

"We are not going nowhere. We are there until we get justice for Jamar Clark," she said. "Fourth Precinct, start taking donations for a new building, because we are not going anywhere."

A crowd of more than 100 people gathered at the site again Wednesday night, along with representatives from the U.S. Department of Justice.

Police haven't released a possible motive for the shootings of the protesters, but the shootings came after several racially disparaging comments about the protests were posted on social media. One video showed a white man brandishing a gun while claiming to be on his way to the protests. Police had issued a warning Friday night, asking demonstrators to be vigilant and report suspicious behavior to authorities.