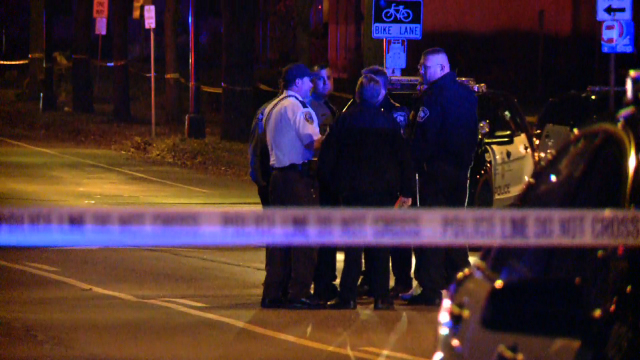 MINNEAPOLIS -- A Minnesota agency is investigating the shooting by a Minneapolis police officer of a black man suspected in an assault, an incident that prompted protests and led to a community forum with the mayor and police chief Sunday.

"We have been saying for a significant amount of time that Minneapolis is one bullet away from Ferguson," he said referring to the shooting by a police officer in Ferguson, Missouri last year of black 18-year-old Michael Brown, which sparked nationwide protests. "That bullet was fired last night. We want justice immediately," Sole told Minnesota Public Radio News.

The shooting happened after police said they were called to north Minneapolis at about 12:45 a.m. Sunday for a report of an assault. When they arrived, the man had returned and was interfering with paramedics who were assisting the victim, police said. Officers tried to calm him, but there was a struggle.

At some point, an officer fired at least once, hitting the man, police said. Witnesses told the Minneapolis Star Tribune that there was a big crowd at the scene, and bystanders became agitated as police pushed them back. Some witnesses said police used a chemical irritant on the crowd.

Authorities have declined to release the man's name, but the Minneapolis NAACP cited family members and witnesses in identifying him as Jamar Clark.

CBS Minneapolis reported that in a press release, the NAACP says several witnesses watched the shooting unfold. According to witness accounts, officers responding to a domestic situation placed Clark in handcuffs and then slammed him on the ground.

"The young man was just laying there; he was not resisting arrest," said Teto Wilson, a north side resident quoted in the NAACP statement. "Two officers were surrounding the victim on the ground, an officer maneuvered his body around to shield Jamar's body, and I heard the shot go off."

Nekima Levy-Pounds, the president of the Minneapolis NAACP, said the group is demanding the officers involved in the shooting be fired and prosecuted. They also want grief counselors for the witnesses and a public apology from city leaders.

Martez McKnight, 22, told The Associated Press that Clark, his uncle, was put on life support after he was taken to a hospital.

"The family is heartbroken and traumatized by the whole event," McKnight said.

A statement Sunday night from state Rep. Raymond Dehn, who represents the area, said Clark was on life support.

Police and a spokeswoman for the Hennepin County Medical Center said they could not comment on the man's condition.

Protesters organized by the group Black Lives Matter Minneapolis marched through the streets Sunday afternoon. Some beat drums and others carried banners. The group went to a police precinct, where they banged on the door and demanded to be allowed inside.

Raeisha Williams with the Minneapolis NAACP told the AP protesters plan to stay at the precinct until the names of the officers involved are released.

Steven Belton, interim president and CEO of the Minneapolis Urban League, was in attendance.

"There is so much anger and pain, and it's combined with a lack of information," Belton said.

Harteau said after the meeting that "misinformation" is being spread about the case, but she would not elaborate.

The chief said she has asked the state Bureau of Criminal Apprehension to conduct an independent investigation.

Two officers are on paid leave, standard practice after such an incident.

Drew Evans, BCA superintendent, said the agency wants to talk to anyone who saw the shooting or might have video of it. When asked about the handcuffs, Evans said there were handcuffs at the scene, but added that authorities are working to determine the exact situation when the man was shot.