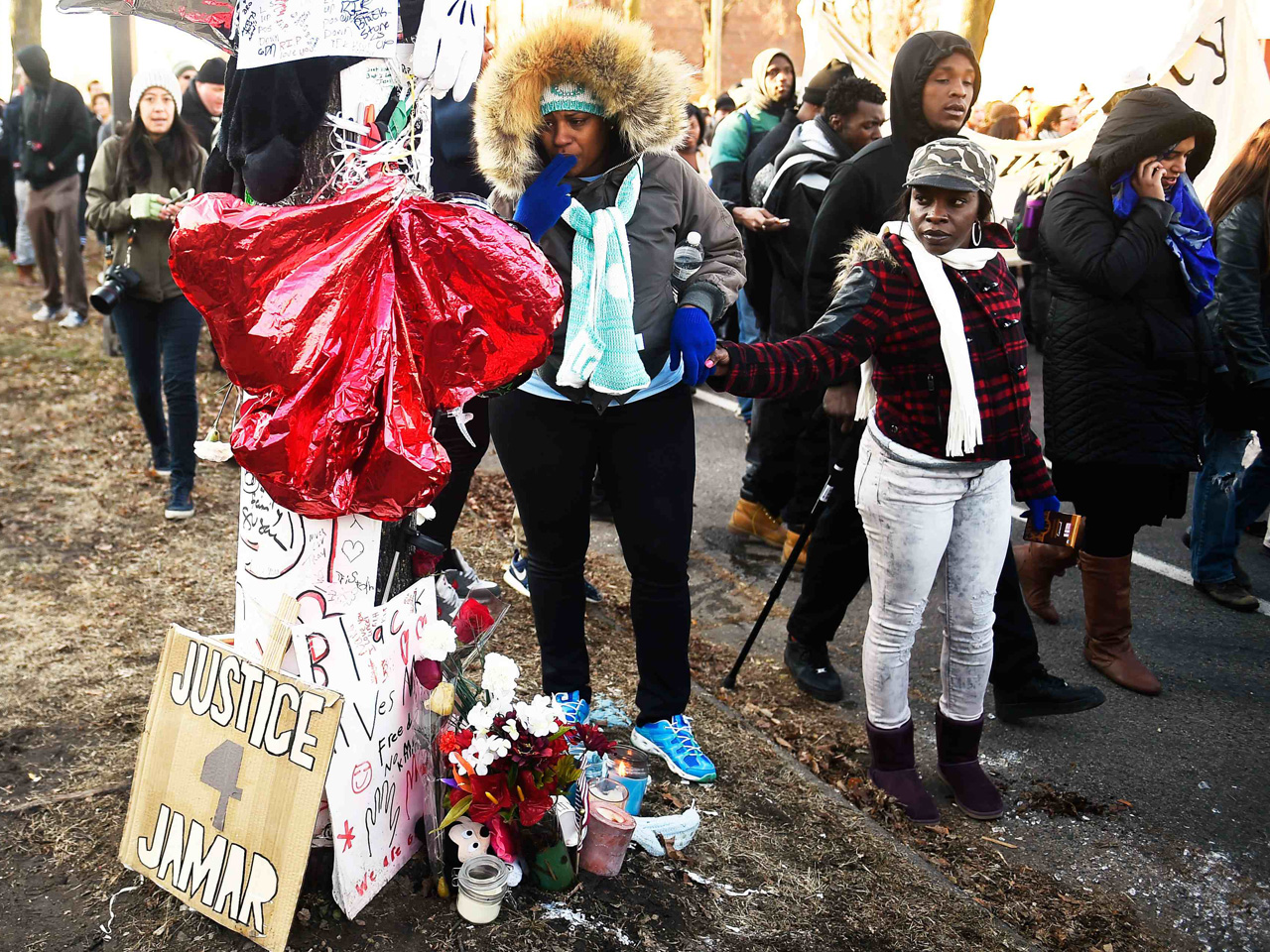 MINNEAPOLIS - They'd been there almost every night, protesters say, cruising in groups by the crowd protesting the shooting death of Jamar Clark, a black man, by Minneapolis police.

The car full of white men would often shoot video of the protests, organized by Black Lives Matter, the protest movement the grew from the shooting death of 18-year-old Michael Brown in Ferguson, Mo.

On Monday night, something changed.

"These three guys come, three white men, covering their faces and they started arguing with the protesters," Delacuesta said.

At 10:41 p.m., three masked men began shouting. Wesley Martin was among those who escorted them away.

"I heard the N word and that's when everybody started charging," he said. "And we get to 14th and Morgan [avenues], and all I heard was pow...pow, pow, pow, pow, pow."

Martin was shot in the leg, and his brother was also hit.

Police, who haven't commented on a motive for the attack on the protesters, said four people were in custody. On Tuesday, police arrested Joseph Martin Backman, 27; Nathan Wayne Gustavsson, 21; Daniel Thomas Macey, 26; and Allen Lawrence Scarsella, 23.

On Wednesday, authorities said the four men would remain in custody awaiting charges over the Thanksgiving holiday weekend.

A 32-year-old Hispanic man was arrested Tuesday but later released. No further details were immediately available.

On Tuesday, a Black Lives Matter spokesperson said the violence directed at protesters only strengthens their resolve.

"What happened last night was a planned hate crime, an act of terrorism," the spokesperson said.

Despite his injury, Martin returned to the protest at the 4th Precinct. It was his way of saying the cause won't buckle to fear.

"It just went through muscle...I don't care if I be in a wheelchair," he said. "I'll still be out here."

At Tuesday's protest, Black Lives Matter organizers asked that no one wear masks, for safety reasons. It helped set the tone for what organizers are calling a joyful, yet sorrow-filled night.

Cameron Clark was one of the victims of the shooting. He was at the precinct protesting the shooting of his cousin, Jamar Clark

"We were just asking them what's going on," Clark said. "They didn't say anything. The guy in all black just opened fire on us."

Clark was shot in the leg and foot after escorting several masked men away from the precinct.

"I'm hurting. My community needs me," he said. "I need them and I'm not going to lay down."

Clark left the hospital Tuesday and joined hundreds of others for a memorial concert. Black Lives Matter Minneapolis and the NAACP had joined up to host that and other events.

The shooting followed several racially disparaging comments about the protests that had been posted on social media in recent days. One video showed a white man brandishing a gun while claiming to be on his way to the protests. Police issued a warning Friday night, asking demonstrators to be vigilant and report any suspicious behavior to authorities.

"We ain't scared," Minneapolis NAACP President Nekima Levy-Pounds told a large crowd gathered for a concert at the precinct early Tuesday evening. "We can't back down. We ain't turning around, but we're here fighting for justice."

Fourteen people whom protesters believed to be white supremacists were kicked out of the area one recent night, said Mica Grimm, an organizer of Black Lives Matter Minneapolis. She said they came in with their faces covered and filmed the crowd but would not talk to people. Some made racist comments.

Grimm said protesters had been threatened by one group online and had been working with hackers to figure out the group's plans. On one night, Grimm said, online chatter included a post stating that a pie had been left at the protest site with rat poison.

"We made sure that all the pies were thrown out, and actually other food was thrown out for fear of contamination," she said.

Grimm said concerns were brought up to police, but protesters felt the threats were not being taken seriously.

Some protesters criticized the police response time and said officers arrived in full riot gear. Officers aggressively pushed back on the crowd, Wronski-Riley said, at one point using a chemical irritant to keep people back.