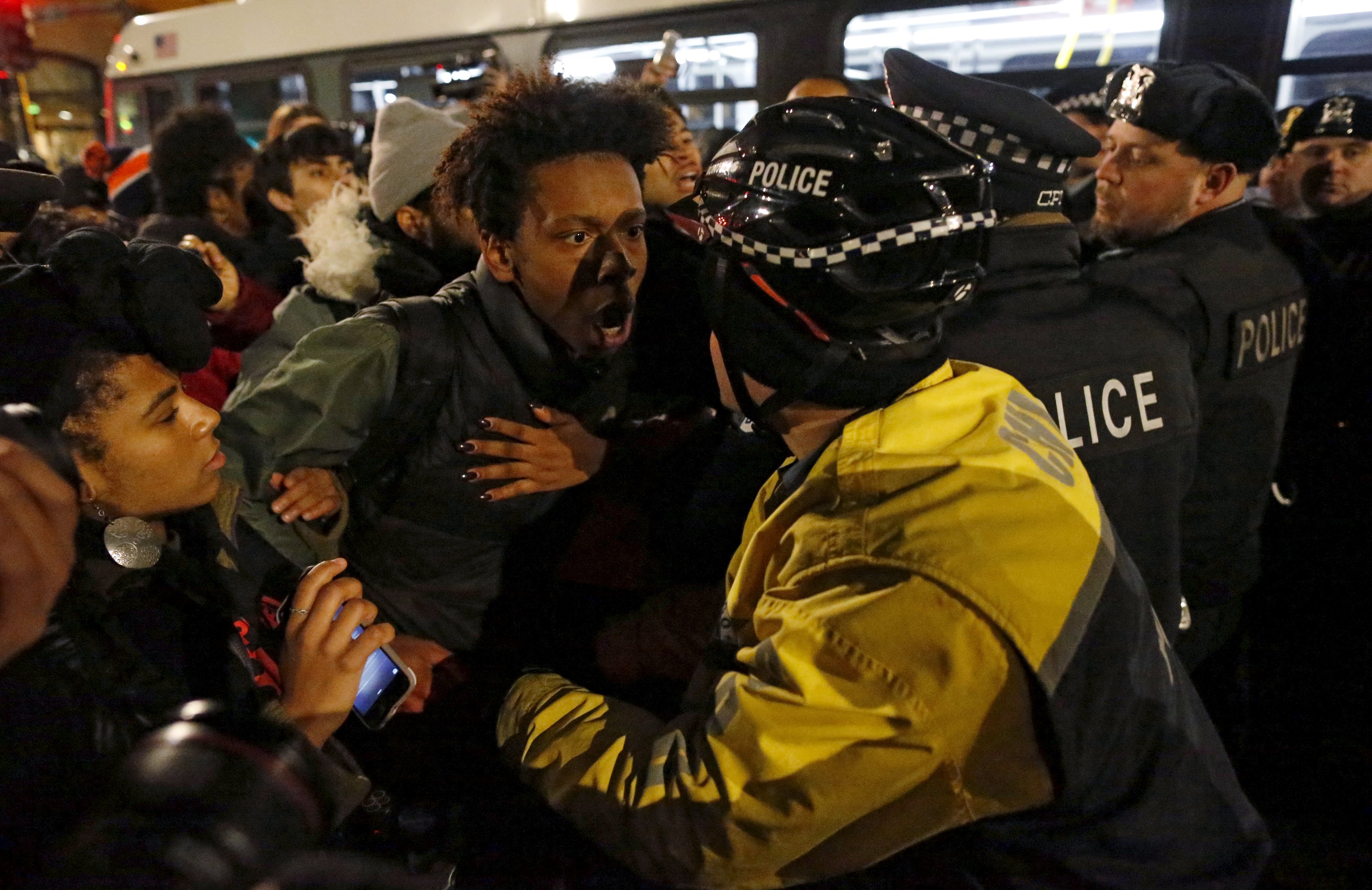 CHICAGO -- Small groups of demonstrators gathered throughout the day Wednesday to protest the death of a black teen shot 16 times by a white police officer, and they urged supporters to join them in trying to shut down Chicago's famous Michigan Avenue shopping district during the Black Friday shopping bonanza.

City officials and McDonald's relatives called for calm, but as CBS News correspondent Dean Reynolds reported, frustration in the city was rife over the fact that it took more than 400 days to charge Van Dyke in the shooting.

Howard Brookins, a member of the city council, told CBS News that to him it seems the police and other powers that be in Chicago just want the case to go away.

"I think that that can be the only conclusion," Brookins told Reynolds. "When the victims appear to be underprivileged or minorities... it takes a long time for justice to come their way."

The protesters held banners showing photos of other black people fatally shot by police in Chicago and elsewhere. Several said they were parents of black men killed by Chicago officers.

"You cannot kill our children and expect us to be quiet any longer," protester Quovadis Green said. "It is unacceptable."

Activist Mark Carter called on people to "rise up" and shut down the Magnificent Mile shopping area on Friday. Protesters also planned to target the Board of Trade and other landmarks in the coming days, he said.

Carter and others want the Department of Justice to investigate the Chicago Police Department and its history of covering up bad behavior.

The Urban League of Chicago joined in the call for a federal investigation, alleging a pattern of "discriminatory harassment" against black people.

The Rev. Jesse Jackson said other officers involved in McDonald's death should be fired or at least suspended. He also wants a special prosecutor appointed to the case, complaining that Cook County State's Attorney Anita Alvarez took too long to bring a murder charge in the shooting, which happened more than a year ago.

Mr. Obama said in a statement Wednesday night he was "deeply disturbed" by the video footage.

In a Facebook post, the president said he is asking Americans to "keep those who've suffered tragic loss in our thoughts and prayers" this Thanksgiving "and to be thankful for the overwhelming majority of men and women in uniform who protect our communities with honor."

Mr. Obama said he is personally grateful to the people of his hometown -- Chicago -- for keeping protests peaceful.

Clinton, who made the comments Wednesday in an emailed statement, added that police officers across the country are doing their duty honorably "without resorting to unnecessary force."

One of Clinton's rivals, Sen. Bernie Sanders, said in his own statement that all Americans "should be sickened" by the video.

For months, Chicago leaders had feared that the release of the video could provoke the kind of turmoil that rocked cities such as Baltimore and Ferguson, Missouri, after young black men were slain by police or died in police custody.

Van Dyke was the subject of 18 civilian complaints over 14 years, including allegations that he used racial epithets and excessive force, police and court records show.

The officer's lawyer, Dan Herbert, told CBS News his client was "really fearful for what's going to happen to his wife and kids, but he's hanging in there."

Complaints against police are not uncommon. But the number filed against Van Dyke was high compared with other officers. At least one person he arrested was later awarded $350,000 in damages in a lawsuit.

But Herbert told CBS News that the videos don't show the full story of what happened during the incident with McDonald.

Van Dyke, according to his lawyer, felt McDonald had made a "threatening gesture."

"Would I see those threatening gestures if I looked at the tape closely?" Reynolds asked Herbert.

"You can't see what my client saw," was the lawyer's response.

Also Wednesday, a Cook County judge dismissed a charge against a protester accused of hitting a police officer in the hours after the video was made public.

London, who was wearing a T-shirt with the phrase "Unapologetically black" on it, walked outside the courthouse to loud cheers.

Prosecutors did not explain why they sought to dismiss the charge. London was among five people arrested on charges that included weapons possession and resisting arrest.

At least two people were detained amid protests late Wednesday when demonstrators disrupted traffic in the city's financial district. On the South Side, about 100 people marched about a half mile to Chicago police headquarters after a community meeting. Crowds remained on Michigan Avenue late into the night, marching and chanting.

Meanwhile, in Minneapolis on Wednesday afternoon, hundreds of people filled a church to pay their respects to a man whose death in an unrelated confrontation with police sparked more than a week of ongoing protests. A picture of a smiling Jamar Clark adorned the program for his funeral.

The relevant portion of the Chicago video runs for less than 40 seconds and has no sound.

McDonald swings into view on a four-lane street where police vehicles are stopped in the middle of the roadway. As he jogs down an empty lane, he appears to pull up his pants and then slows to a brisk walk, veering away from two officers who are emerging from a vehicle and drawing their guns.

Almost immediately, one of the officers appears to fire from close range. McDonald spins around and collapses on the pavement.

The car with the camera continues to roll forward until the officers are out of the frame. Then McDonald can be seen lying on the ground, moving occasionally. At least two small puffs of smoke are seen coming off his body as the officer continues firing.

In the final moments, an officer kicks something out of McDonald's hands.

Police have said the teen had a knife. Alvarez said Tuesday that a 3-inch knife with its blade folded into the handle was recovered from the scene.