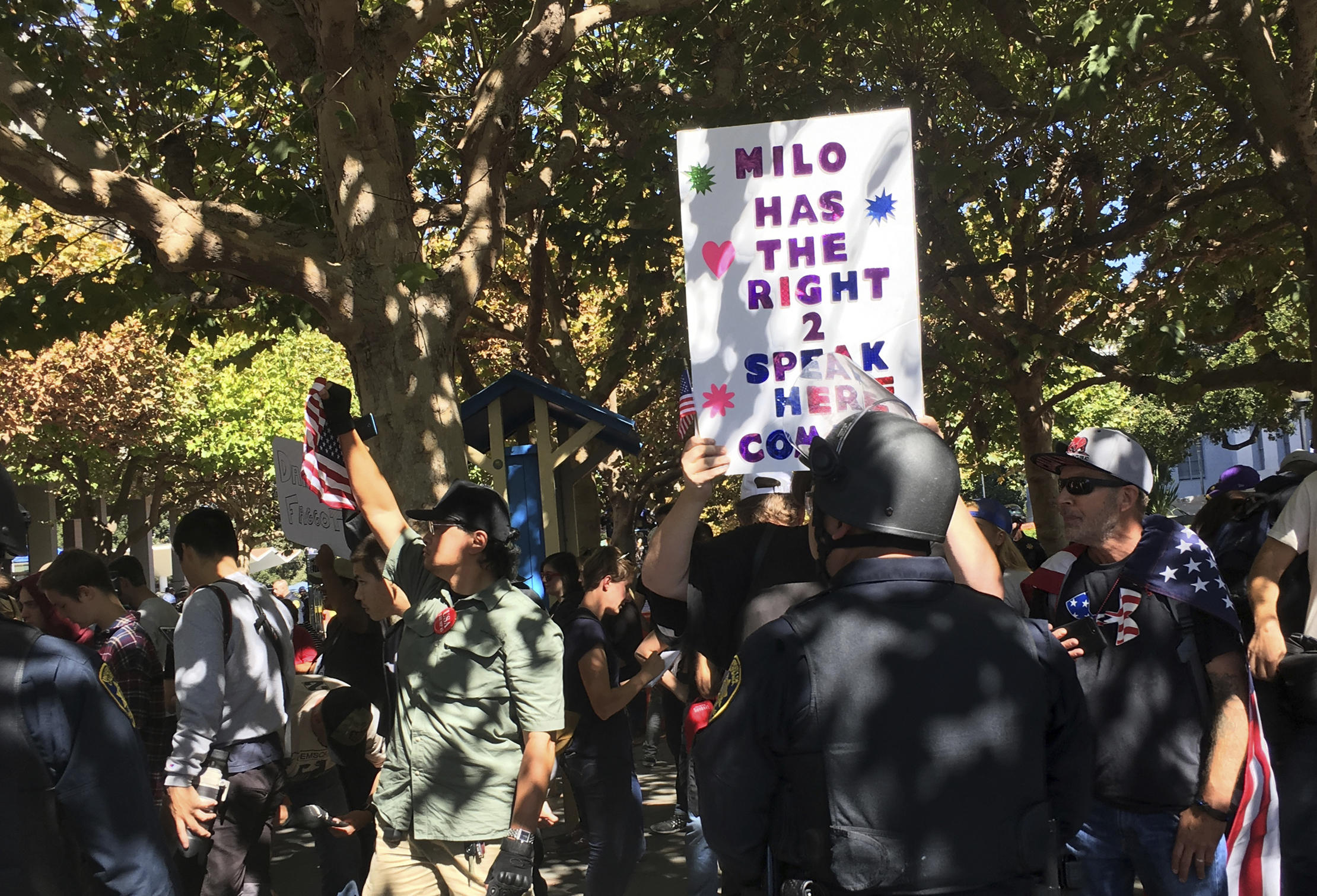 SAN FRANCISCO -- Milo Yiannopoulos was whisked away in a car after a brief appearance at the University of California, Berkeley, that drew a few dozen supporters and a slightly larger crowd protesting the right-wing provocateur.

Yiannopoulos blew kisses, posed for selfies and briefly addressed a few dozen supporters at the campus while a slightly larger crowd protesting him was kept separate by police. Wearing sunglasses and an American flag hoodie under a denim jacket, he spoke without amplification for a few moments on the steps of Sproul Hall. Then he led a rendition of the "Star Spangled Banner" before being whisked away in a car. The whole appearance lasted less than a half hour.

Jake Wall, a college student from Los Angeles in town to visit his girlfriend, described Yiannopolous' showing as a "meet and greet." He said Yiannapoulos couldn't make any points without a microphone and promised his admirers he'd return to deliver a proper address.

"When you can't speak through a mic, how effective was that?" Wall asked. University officials said a request for amplification, required under school rules, was never made.

A defiant Yiannapoulos announced Saturday that he would appear at an unsanctioned rally despite the sudden cancellation of a planned four-day conservative event dubbed Free Speech Week. The campus conservative group Berkeley Patriot, which had been organizing the gathering with Yiannopoulos, told university administrators that the group would cancel it, the university said.

Yiannopoulos said he was blindsided by the news.

Those hoping to hear him speak Sunday were herded through metal detectors, while demonstrators who came out against the appearance were held behind barricades on Sproul Plaza, the center of activity on campus during the 1960s Free Speech Movement.

Kat McLain, 26, said she considers herself a liberal but decided to come out to support conservatives' right to be heard. "There's no way to come to a peaceful resolution until we can stop and talk to each other," she said.

University officials said there were no injuries and at least two arrests, including one of somebody allegedly using unpermitted amplified sound. The Berkeley Police Department said at least five people were arrested near campus, most of them for carrying a banned weapon.

UC Berkeley spokesman Dan Mogulof joked that the money spent on mobilizing police for the short appearance amounted to "probably the most expensive photo op in the university's history." But he defended the tactical strategy of deploying so many officers, saying they had to be prepared for the unexpected.

Berkeley freshman Alexandria Storm bemoaned the money spent on a huge police presence for an event that went bust. "This is a waste of resources, a waste of student dollars to militarize the police," she said.

Berkeley's reputation as a liberal stronghold and the birthplace of the Free Speech Movement has made the city and campus flashpoints for the country's political divisions since the election of Republican President Donald Trump.

When Yiannopoulos last was scheduled to speak at UC Berkeley in February, protests caused more than $100,000 in damage to the campus, and more than a dozen businesses were vandalized in the city's downtown area, CBS San Francisco reports, citing university officials.