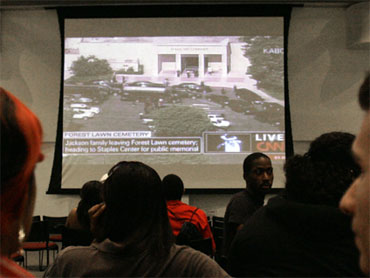 Millions of Americans gathered in public, in front of televisions and at computer screens to experience the mourning of Michael Jackson.

Crowds gathered in New York in Times Square as well as outside Harlem's Apollo Theater - where the Jackson 5 won "Amateur Night" in 1967.

Chants of "Michael! Michael!" rang out in Harlem, where about 1,000 gathered to watch the memorial service on a giant screen live from Los Angeles' Staples Center.

Jackson impersonator Moses Harper, teary-eyed at the sight of the singer's casket, danced Jackson's version of "Ease on Down the Road," from the musical "The Wiz." "I'm just grateful that I got to live in his time," said Harper.

In Jackson's hometown, Gary, Indiana, a steady stream of fans were visiting the singer's boyhood home.

"I felt like I needed to pay homage to 'the greatest,'" said 49-year-old, retired chemical operator Jackie Ford, who used to do Jackson's moonwalk and drove to Gary from Aberdeen, Mississippi.

In Detroit, where his career was launched with Motown Records, hundreds of people filled into the auditorium at Detroit's Charles H. Wright Museum of African American History. There, the memorial service was shown on a giant screen.

Outside the White House in Washington, Rocky Twyman, a community activist, asked tourists to sign a "book of condolences" for Jackson's family.

"We consider him a national hero," said Twyman. "We want people to remember the good things he did."

The 50-year-old singer's June 25 death brought an outpouring of grief and remembrance from fans across the globe.

The reaction was especially considerable online, where many people first read the news. The avalanche of traffic temporarily brought Twitter, Wikipedia and AOL's instant messaging service to a crawl.

Jackson generated the most tweets per second since Barack Obama was elected president in November. Akamai's Net Usage Index, which monitors global news consumption online, found that Web traffic to news sites increased by about 50 percent.

Aside from the wall-to-wall coverage planned by the TV networks and cable news channels, the memorial service was streamed online by many news outlets and Web sites, including Hulu.com, MySpace.com and The New York Times' Web site. The Associated Press' online video network also was offering a live broadcast.

Not all of the coverage was to be virtual. Cinedigm Digital Cinema Network said it would carry the service on its live digital network in more than 80 movie theaters nationwide.

At the same time, others have grown tired of the continual coverage of Jackson's death, believing it has overshadowed more important news and that Jackson - who was tried and acquitted of sexually abusing a child in 2005 - doesn't deserve such attention.

A Pew Research Center poll published last week found that 64 percent of those surveyed said Jackson's death has received too much coverage.