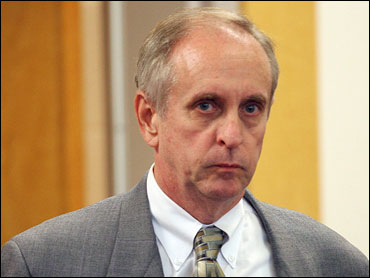 The verdicts on two counts of capital murder, first degree murder and conspiracy to commit murder came after one day of deliberations.

Brooks showed no emotion as the verdicts were read, while members of the victim's family sobbed.

Witnesses included two men who confessed to helping kill Reid. They said Brooks recruited them and paid them to ambush Reid in a barn in Deerfield in June 2005, where they said Brooks helped beat him to death with a hammer.

The jury found Brooks guilty of capital murder involving solicitation and capital murder during a kidnapping and will now hear evidence on whether Brooks should be sentenced to death. That aspect of the trial begins next Wednesday.

The jury rejected defense arguments that Brooks was involved in a plan to confront Reid, not kill him.

Brooks, 56, of Las Vegas, was convicted of hiring three men to kidnap and kill Reid, 57. Witnesses testified that Brooks wanted Reid killed because he thought Reid had stolen items from him during a 2003 moving job.

Brooks is the first person to be tried for capital murder in New Hampshire in half a century. A second capital murder trial is about to begin in Manchester, where Michael Addison is accused of killing Manchester Police Officer Michael Briggs two years ago.

Key testimony against Brooks came from two men who said Brooks hired them to kill Reid. Joseph Vrooman, 52, and Michael Benton, 32, testified after reaching plea deals with the state in which they may receive a lighter prison sentence in exchange for their testimony. They said they ambushed Reid after he was lured to the barn.

Benton testified he hid in a closet in the barn, waiting for another man to push Reid inside.

"Immediately when he fell in, that's when I hit him with the hammer," Benton said.

Vrooman said he was paid $10,000 to help kill Reid, and watched Brooks hit Reid with the hammer.

"When he (Brooks) picked up the hammer he said, 'Stop the heart, stop the bleeding,' and he struck (him) twice in the chest area, once was a solid blow, the second one was a glancing blow," Vrooman testified.