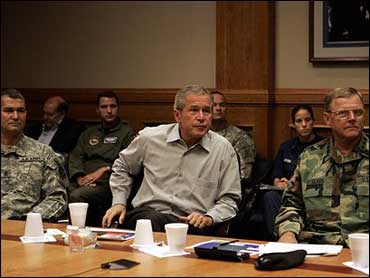 Mr. Bush said he had stopped at Randolph Air Base in San Antonio and the U.S. Northern Command to better understand how the government can prepare for natural disasters and ease their effects.

He said he also wanted to know whether there was times when the Defense Department should take charge during such disasters.

"Clearly, in the case of a terrorist attack, that would be the case, but is there a natural disaster of a certain size that would then enable the Defense Department to become the lead agency in coordinating and leading the response effort?" Mr. Bush said.

"That's going to be a very important consideration for Congress to think about," he said.

Mr. Bush got an update about the federal hurricane response from military leaders at Randolph Air Force Base. He heard from Lt. Gen. Robert Clark, joint military task force commander for Hurricane Rita, and Maj. Gen. John White, a task force member, who noted confusion in search and rescue operations after Hurricane Katrina.

CBS's Mark Knoller reports that the generals issued blunt talk to the president. One called the federal response in New Orleans to Hurricane Katrina "a train wreck." He was talking about an incident in which five helicopters responded to rescue one person.

With Katrina, "we knew the coordination piece was a problem," White said. "With Rita, we had the benefit of time. We may not have that time in an earthquake scenario or similar incident."

"With a national plan, we'll have a quick jump-start and an opportunity to save more people," White said.

Bush thanked White for his recommendations.

"This is precisely the kind of information I'll take back to Washington to help all of us understand how to do a better job," the president said.

President Bush's comments came as residents along the Texas and Louisiana coasts began clearing up debris and power crews worked to restore power to more than 1 million customers in four states.

Still, the devastation was less severe than that caused by Hurricane Katrina when it made landfall on Aug. 29.

Mr. Bush was spending part of Sunday in San Antonio, where federal supplies and workers were being assembled for Rita and then fly to Baton Rogue, La.

On Saturday, he made a stop in Austin, Texas, and at the U.S. Northern Command in Colorado, where he autographed a photo of himself gripping a bullhorn at ground zero three days after the attacks of Sept. 11, 2001.