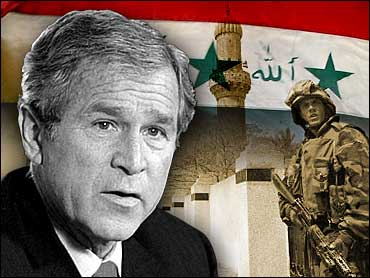 Members of the U.S. military and their families say the Bush administration underestimated the number of troops needed in Iraq and put too much pressure on inadequately trained National Guard and reserve forces, according to a poll released Saturday.

The National Annenberg Election Survey found that 62 percent in the military sample said the administration didn't send an adequate number of troops to Iraq. And 59 percent said too much of a burden has been put on the National Guard and reserves when regular forces should have been expanded instead.

Family members were more critical of the administration's Iraq policy than those on active duty.

A slight majority of the military and families, 51 percent, said showing photos of flag-draped coffins being returned to the United States would increase respect for the troops.

The Pentagon has refused to release government photos of the coffins, saying it has begun enforcing a policy installed in 1991 intended to respect the privacy of the families of the dead soldiers.

A poll of military members and their families released Friday by Annenberg shows Mr. Bush is more trusted to be commander in chief than Kerry, by a 69-24 margin.

Those in the military and their families have a more favorable view of the president than Americans generally, and they take a more optimistic view about Iraq, the economy and the nation's direction.

Separately, Associated Press polling found national security issues such as the war in Iraq and terrorism are dominating voters' attention in the final weeks before Election Day.

Along with security issues such as war and terrorism, the economy and health care were near the top of the list of the nation's most important problems in the AP-Ipsos poll.

When asked in an open-ended question to identify the most important problems facing the United States, 27 percent mentioned war. That number has tripled since the summer of 2003 in the aftermath of the invasion of Iraq. An additional 18 percent named terrorism.

Economic problems - including the overall economy and unemployment - were named by four in 10, far behind national security issues. Two in 10 specifically mentioned the economy, and 13 percent said unemployment.

On other military matters raised in the Annenberg survey released Saturday: