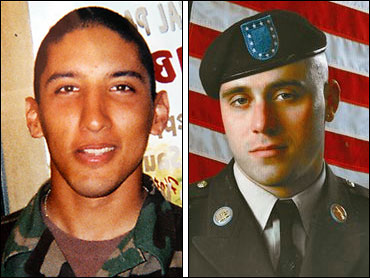 At least one and possibly both of the soldiers who were mutilated and killed in Iraq last weekend was beheaded, a U.S. military official said Wednesday.

The description by the official, who was in Washington, confirmed fears that were raised by other U.S. and Iraqi officials who have said the mens' bodies showed sign of brutal treatment.

The official requested anonymity because the final report on the bodies' conditions has not been formally released.

On Tuesday, after Iraqi officials disclosed that the bodies were found, the Shura Council posted a Web statement, saying that the successor to slain Iraqi al Qaeda leader Abu Musab al-Zarqawi's had "slaughtered" the soldiers. The language in the statement, which could not be authenticated, suggested the group was saying the men were beheaded.

The remains of the two soldiers were expected to arrive Wednesday at Dover Air Force Base in Delaware for DNA testing to positively identify them.

The bodies are believed to be of Pfc. Kristian Menchaca, 23, and Pfc. Thomas L. Tucker, 25. The two soldiers disappeared after an insurgent attack at a checkpoint by a Euphrates River canal, 12 miles south of Baghdad, that killed another U.S. soldier.

The U.S. military recovered the bodies Tuesday in an area it said was rigged with explosives. It took troops roughly 12 hours to get to the bodies, said a second U.S. military official, who spoke on condition of anonymity because the details have yet to be released.

An Iraqi official said the Americans were tortured and killed in a "barbaric" way.

The insurgent group claimed the new leader of al Qaeda in Iraq executed the men personally, but it offered no evidence. The U.S. military did not confirm whether the soldiers died from wounds suffered in an attack Friday or were kidnapped and later killed.

In Oregon, Tucker's family grieved in private. They said in a statement they were devastated by the news but heartened by the community support.

"Tom has gained a much larger family through this ordeal than he had when he left home to go help to free the Iraqi people and protect his country from the threat of terrorism," the family said.

"I think that everybody that knew Tom, and knows him, will be pretty devastated about it," Rick Strader, who worked with Tucker when Tucker was in high school, told CBS News correspondent Stephan Kaufman in Tucker's hometown of Madras. "It's horrible. They're over there doing a job and something like this happens and it really hits home. It hits this town really hard."

Menchaca's relatives are outraged at hearing grisly reports of his slaying through the media.

Menchaca's mother, Maria Vasquez, had already heard the reports when a member of the Army's casualty assistance office arrived at her Brownsville home Tuesday morning. She was sobbing when she answered the door of her home, accompanied by her niece, Felipa Gomez.

"She's hanging in there," and still holding on to hope that Menchaca will make it back alive, Gomez said. "She might be frightened, but she won't show it."

Vasquez later issued a statement written in Spanish that said, "I am against the war and I feel very hurt by what has happened to my son."

Ken MacKenzie, an uncle of Manchaca, lashed out at the U.S. government Tuesday morning, saying it did not do enough to find the men and keep them safe.

"I don't want people to forget," said Mario Vasquez, another uncle of Menchaca. "I don't want them to think that they were just two more soldiers. I want them to find the people that did that and make them pay."

The discovery of the remains followed a massive search effort by some 8,000 Iraqi and U.S. troops after the two men went missing Friday near the town of Youssifiyah in the volatile Sunni Triangle south of Baghdad.

U.S. Maj. Gen. William Caldwell said one U.S. soldier died and 12 others were wounded during the search effort, while two insurgents had been killed and 78 were detained as coalition forces received 66 tips, 18 that were considered worthy of follow-up.

The claim of responsibility was made in the name of the Mujahedeen Shura Council, an umbrella organization of five insurgent groups led by al Qaeda in Iraq. The group posted an Internet statement Monday claiming it was holding the American soldiers captive.

"We give the good news... to the Islamic nation that we have carried God's verdict by slaughtering the two captured crusaders," said the claim, which appeared on an Islamic militant Web site where insurgent groups regularly post statements and videos.

"With God Almighty's blessing, Abu Hamza al-Muhajer carried out the verdict of the Islamic court" calling for the soldiers' slaying, the statement said.

The statement said the soldiers were "slaughtered," suggesting that al-Muhajer beheaded them. The Arabic word used in the statement, "nahr," is used for the slaughtering of sheep by cutting the throat and has been used in past statements to refer to beheadings.

The U.S. military has identified al-Muhajer as an Egyptian associate of al-Zarqawi also known as Abu Ayyub al-Masri.

The killings would be the first acts of violence attributed to al-Muhajer since he was named al Qaeda in Iraq's new leader in a June 12 Web message by the group. Al-Zarqawi was killed in a U.S. airstrike on June 7.