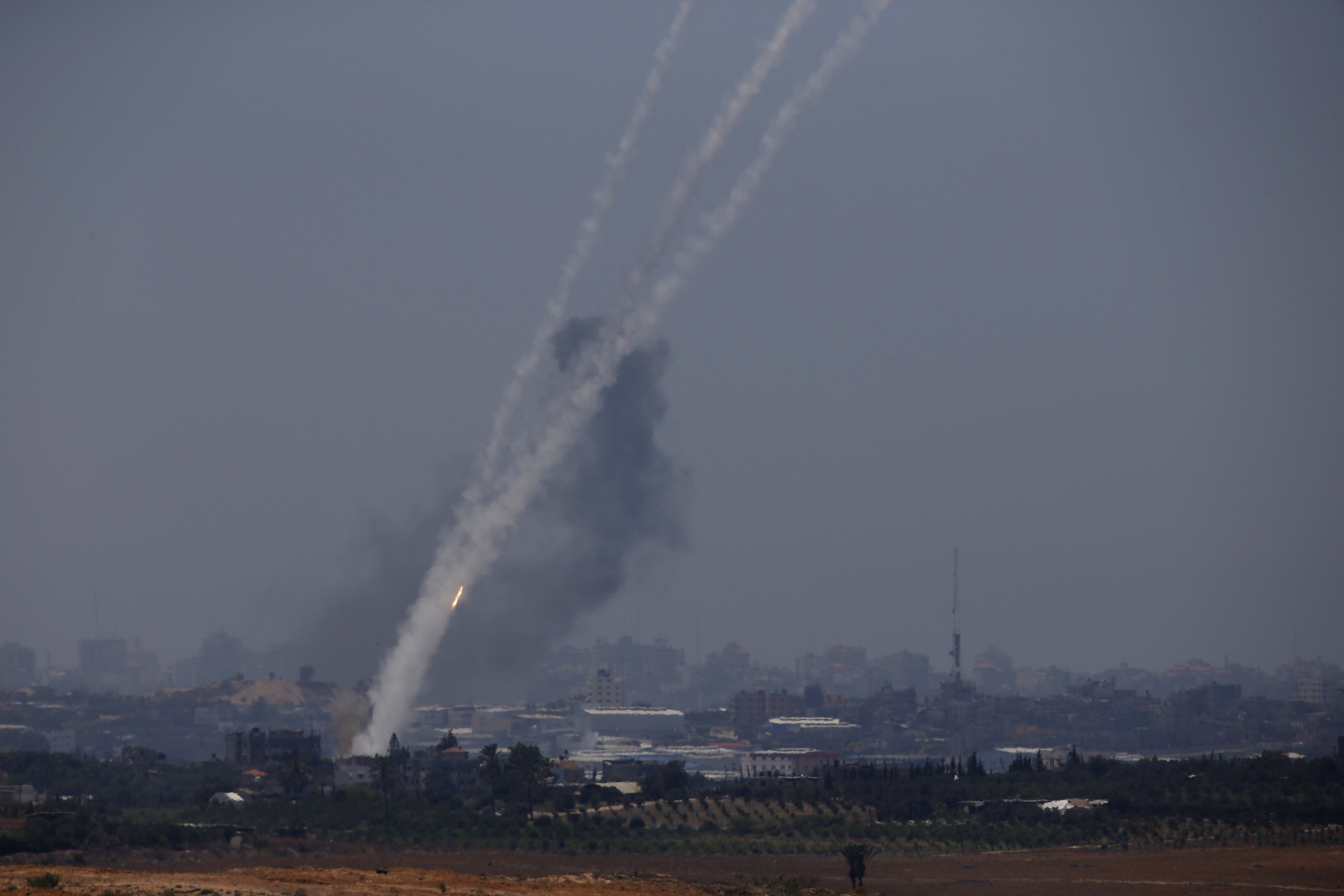 JERUSALEM -- Israel dramatically escalated its aerial assault targeting hundreds of Hamas sites in the Gaza Strip Thursday as Palestinians reported the strikes also hit a home and a beachside cafe, raising the total number of people killed in this week's offensive to at least 85. Israel's missile defense system also once again intercepted rockets fired by militants at the country's two largest cities, Jerusalem and Tel Aviv.

Thursday morning, CBS News correspondent Holly Williams says Palestinian residents were holding funerals for the victims, including a family of eight who seem to have been mistakenly killed in the deadliest raid yet of the current conflict.

Israel has mobilized 20,000 reservists for a possible ground operation into Gaza, but for the time remains focused on maximizing its air campaign, Lerner said. A ground invasion could lead to heavier civilian casualties on the Palestinian side and put Israeli ground forces in danger.

Neither side is showing any sign of halting their heaviest fighting since an eight-day battle in late 2012. Israel says that Hamas must cease rocket fire from Gaza for Israel to consider a truce. Militants have fired hundreds of rockets, striking across the length of Israel and disrupting life across the country.

Williams reports that in Ashdod, just 25 miles from the Gaza border, they've been living with rocket attacks for almost 15 years. But this time the militants' missiles are hitting deeper into the country than ever before -- a shocking jolt to Israelis' sense of security.

No Israelis have been seriously harmed as the "Iron Dome" defense system has intercepted at least 70 of the projectiles destined for major cities. The system is designed to intercept rockets headed toward populated areas, while allowing others to fall in open areas.

"The ground option needs to be the last option and only if it is absolutely necessary. It is a carefully designed plan of action," Lerner said.

The Israeli security Cabinet met to discuss its next moves.

Secretary of State John Kerry, in Beijing for a summit with Chinese leaders, said the U.S. is trying to stem the surging violence in a way that allows the Jewish state to continue defending itself from Hamas rocket fire. He called it a "dangerous moment" for the Mideast.

"The military's successes so far have been very significant," he said. "We will continue until they understand that this escalation is not beneficial to them and that we will not tolerate rocket fire toward our towns and citizens."

Palestinian medical officials said one strike early Thursday struck a home in the southern Gaza city of Khan Younis, killing eight members of the Al Haj family. Tractors cleared away large piles of debris from the demolished building as one man laid atop a mattress and blankets that remained.

An earlier strike killed eight people who were at a Gaza beach cafe watching the World Cup semifinal match between Argentina and the Netherlands, Mahmoud Sawali said, adding at least two of his brothers were among the dead.

"We only ask of help from God. Here I have two brothers who are martyrs, and I'm looking for the third," he said.

The Israeli military said it was investigating both incidents. It also said it struck a car in Gaza carrying three Islamic Jihad militants involved in firing rockets. The militant group confirmed that its men were killed in the strike. Hamas officials said that the Palestinian side of its border crossing with Israel had also been destroyed in Israeli airstrikes.

The Health Ministry in Gaza has reported 85 deaths, including 22 on Thursday. It says about half were women and children though the exact breakdown could not immediately be confirmed.

Israel accuses militants of deliberately endangering civilians by using homes and other civilian buildings for cover. The military has also directly targeted the offices and homes of known militants that it says are used as command centers. The military says it contacts the families first to ask civilians to evacuate before striking its targets. Many of the dead appear to be relatives of wanted militants, according to names of the dead provided by the Palestinians.

Hamas is firing rockets from "within houses and streets and neighborhoods which are populated with civilians ... exposing these civilians to retaliation and to backfire," Israeli Foreign Ministry spokesman Yigal Palmor said.

After an overnight lull, militants resumed their barrage toward central and southern Israel. Remnants of a long-range rocket fired from Gaza landed in a gas station in south Tel Aviv after being shot down by the Iron Dome.

Late Thursday, four rockets were fired at Jerusalem, setting off air raid sirens across the city. The military said two rockets were intercepted, while two fell in open areas. A plume of white smoke following the interceptors could be seen over central Jerusalem. Israel considers Jerusalem its capital, but the city is also home to a large Palestinian population and key Muslim holy sites.

The longer range of the rockets fired from Gaza has disrupted life across southern and central Israel, where people have been forced to remain close to home, and kindergartens and summer camps have closed. Israeli television has been a constant news loop with updates from both sides of the border and even radio music stations were interrupting songs with news of every siren informing of incoming rockets.

"We heard the siren and we immediately entered the home shelter," said Avraham Nachum, from the southern Israeli town of Netivot. "One of the boys was in the shower. He didn't manage to step outside of the shower on time."

Besides firing toward Israel's two largest cities of Tel Aviv and Jerusalem, Hamas also launched a rocket that reached the town of Zichron Yaakov, more than 100 kilometers (60 miles) north of Gaza.

Late Thursday, Israeli police said they intercepted a Palestinian car whose two occupants were trying to smuggle a bomb into Israel from the West Bank. Police spokesman Micky Rosenfeld said the men were arrested at a West Bank checkpoint, and the bomb was being dismantled.