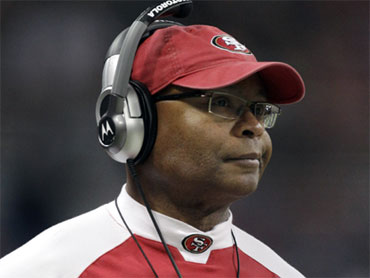 Team president Jed York addressed reporters in St. Louis after the Niners' 25-17 loss Sunday and was noncommittal about whether Singletary will coach the season finale at home next Sunday against Arizona. He said money isn't an object in this decision considering Singletary has two years remaining on his contract.

"We're going to take our time before we make any decisions like that. We don't want to make an emotional decision right now, after the game," York said in the locker room. "Obviously, we didn't achieve the things we set out to achieve. We should be a playoff team. We aren't a playoff team this year. Very disappointed about that. We need to figure out how we can get into the playoffs and how we can start competing for Super Bowls."

San Francisco (5-10) was eliminated from playoff contention in a season that began with high hopes of winning the NFC West and reaching the postseason for the first time since 2002.

"It's very disappointing. Words can't express the disappointment that the players feel, or myself or the staff," Singletary said. "You know what, I'll put it this way: a personal failure. I'm the head coach of this team and obviously wanted us to do better, felt that we could do better. There are some obvious questions that I hoped would be answered as the season went on, and obviously were not answered. When that happens, you end up out of the playoffs.

"I take full responsibility for every unanswered question."

The 49ers began 0-5 and will finish with a losing record for the seventh time in eight years. They went 8-8 in Singletary's first full season, then produced an unbeaten preseason this year only to drop their first five games. It was the franchise's worst start since losing seven in a row to begin a 2-14 season in 1979 — in the late Hall of Famer Bill Walsh's first year as coach.

No team has recovered from an 0-5 start to reach the playoffs, but the 49ers had that chance if they'd beaten the Rams and won again next Sunday. If that had happened, San Francisco would have won the tiebreaker over Seattle and St. Louis to win the division and become the first team with a losing record in a non-strike season to make the playoffs.

"I don't know what's going to happen," cornerback Nate Clements said of Singletary's future. "All we can continue to do is go out there and do our job. I'll leave that up to the front office."

The 52-year-old Singletary, who first took over as head coach on an interim basis when Mike Nolan was fired in October 2008 and soon declared "I want winners!" had two years remaining on his contract. York — son of owner John York — seems ready for major change around the Niners despite having to pay Singletary, a Hall of Fame linebacker during his playing days for the Chicago Bears.

"Money is no object," Jed York said in St. Louis. "I mean, our object is to win the Super Bowl, year in and year out be there and compete for Super Bowls. We're going to make sure we get this right."

When asked if he thinks he will be back as coach, Singletary said: "I don't know. That's not my decision."

Singletary switched quarterbacks three different times, starting with Alex Smith, going to Troy Smith for five games even after Alex Smith's hurt non-throwing shoulder had healed, then back to Alex Smith for two games before Troy Smith started Sunday — only to give way to Alex Smith in the fourth quarter after Troy Smith had a heated exchange with Singletary.

"I'm not worried about individual things like that. What bothers me is we come in here, this is a playoff-caliber game, and we didn't get it done," York said. "And that's the bottom line."

York said he plans to hire a general manager and will open a search to fill the job. Since former GM Scot McCloughan departed last March — and ended up with Seattle — in what York called a "mutual parting," San Francisco's football operations have been run by vice president of player personnel Trent Baalke. He was responsible for selecting two offensive linemen with the team's first-round draft picks in April, and both Anthony Davis and Mike Iupati are starters on the Niners' revamped offensive line.

York was asked whether a new general manager would help in a potential coaching search.

Finding a quarterback will be another priority. Alex Smith most certainly will be gone after this season once the 2005 No. 1 overall pick's contract expires.

"One more week. We can start talking about that in one more week. I understand my contract is up and what's at stake," he said. "We'll finish out here and see what happens."