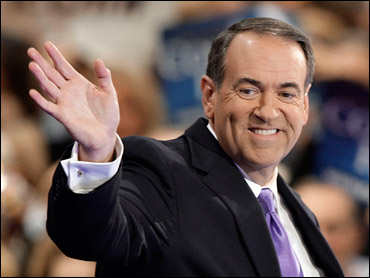 Among them are Huckabee's reflections on his reception from what he calls the "pompous patrician" wing of his party and "elites" in general. Discussing his predictions that an economic downturn was coming - which he said he was making a year before it happened - Huckabee complains that he was "considered a complete idiot" as a result.

"What bothered me more than anything was the disdain that I experienced from the Ã©lites: 'Oohhhh, who does Huckabee think he is, speaking about the economy,'" he told the New Yorker. "...They treated me like a total hick. A complete, uneducated, unprepared hick."

Huckabee, who advocates a constitutional amendment barring same-sex marriage, also addresses his opposition to gay rights in part by invoking "the ick factor."

Huckabee considers himself ideologically similar to Fox News colleagues Glenn Beck, Sean Hannity, and Bill O'Reilly; he says his religious worldview is "absolutely irreconcilable" with those who do not believe God created man and chafes at being questioned about whether he believes in evolution. ("I'm not planning on writing the curriculum for an eighth-grade science book.")

Huckabee, the article reveals, has moved to Florida and registered there as a Republican - a move that might boost a 2012 presidential run by giving him a presence in the state that essentially decided who would be the GOP presidential nominee in 2008. His Fox News show, which is tailored to his likable personality, has helped him maintain a presence among conservative voters.

But there are also roadblocks to a Huckabee run, among them the disdain directed from his party's fiscal conservative and the fact that Huckabee seems to be pretty happy in his current life. As the "total hick" quote above illustrates, Huckabee has never fit in well with the Republican establishment that directly and indirectly provides the fundraising and institutional support upon which presidential runs are built.

Nonetheless, the GOP field lacks a clear frontrunner, with other potential candidates also dealing with glaring potential liabilities. (Briefly: Sarah Palin faces questions of competence and divisiveness; Mitt Romney, ideological inconsistency and an albatross of a Massachusetts health care law; Tim Pawlenty, an inability to generate much momentum despite his best efforts.) That leaves room for Huckabee to make a potentially-viable run as an evangelical outsider if he has the stomach to enter the fray again.

"It's almost like a reality show," he told the New Yorker in a discussion of what he found distasteful in his 2008 run. "It's who are we going to vote off the island? And you vote them off not because they're not capable of leading the island but because you've found someone more entertaining."