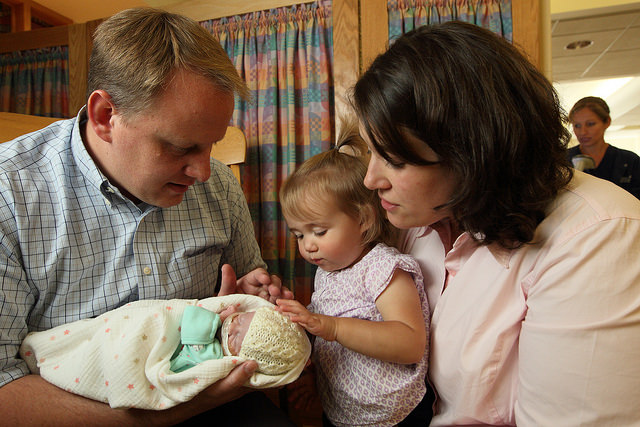 As with most babies, Alexandra Mae Van Kirk let out an audible wail when she entered the world on July 7. But unlike most babies, the Michigan girl was born eight weeks premature with a life-threatening blocked artery caused by a congenital heart defect. She weighed just 2 pounds and 3 ounces. Nicknamed "Mighty Girl" by her family, the baby would require a procedure known as a pulmonary balloon valvuloplasty if she were to survive.

Last month, Alexandra became one of the world's tiniest humans to undergo the procedure. It involves a surgeon inserting a tiny catheter into the patient's femoral vein, then an un-inflated balloon is placed through the opening of the narrowed pulmonary valve. The balloon is inflated, which improves blood flow, and then removed.

Her surgeon at the Helen DeVos Children's Hospital in Grand Rapids had performed the procedure 300 times in the last 20 years, but never on a baby so small. The smallest patient before "Mighty Girl" weighed 4 pounds.

On Thursday, her mother Heidi Van Kirk told CBS News that Alexandra, now one month old, is doing well and the procedure was a great success. Her weight is up to 2 pounds and 15 ounces.

Earlier this week, doctors put the baby back on caffeine to help improve her breathing and swallowing reflexes. And she's already started eating from a bottle.

Twenty-two weeks into the pregnancy, Van Kirk learned the baby was not developing as she should. "She was only given a 35 percent chance to make it to a live birth," said mom, choking up. But the couple never considered terminating the pregnancy. "When we went to the high-risk doctor she slightly mentioned it, and we said it wasn't an option. She smiled and it was never mentioned again."

It's still unclear when the resilient infant will be ready to go home with her family. The medical team and her parents are hoping for September, but the coming weeks will be critical to her health. "For the next month it's just about her learning to eat and getting bigger," said Van Kirk. "She needs to learn to regulate her body temperature. She has to pass her car seat challenge."

For now, the couple is using the time to become better acquainted with their new little one. Her big sister Josephine, 18 months old, is also getting to know her. "She knows there's something different about the baby and that she's ours but she doesn't understand why the baby is in a box," said Van Kirk. "To give the baby a kiss she has to actually kiss the outside of the isolette."