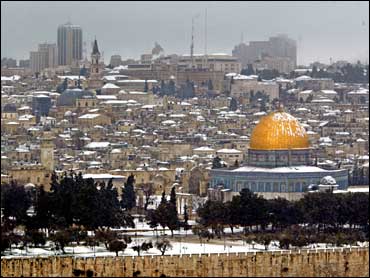 A Turkish freighter sank off Israel, but its 10 crew members were rescued.

The winter storm was shaping up as the worst in the Middle East since 1950 and looked set to continue into Wednesday. More than one foot of snow had fallen in Jerusalem by midday, quieting the holy city normally noisy with the rumble of buses and shouts of market vendors.

The storm provided a brief lull in the 29-month Israeli-Palestinian conflict that has claimed nearly 3,000 lives. Newscasts led with the weather.

CBS News Correspondent Robert Berger took a stroll through the white stuff, and found children playing in the snow. With no school, it was a day to have some fun and get away from it all.

"I think it's great," said sixth-grader Sharona Meyer. "It's a break from all the terrorist attacks and let's us think about something else, and just have a nice break of snow.

"Missing school is the best part," she added. "It's like a one day vacation."

Pine trees and even palm trees were laden with snow, and the stone buildings that characterize Jerusalem were bristling in a blanket of white. Businesses were closed, public transportation wasn't running. Most taxi companies were not operating, and the few taxis on the streets were charging up to four times their normal fares.

People in Israel simply aren't prepared to go out in the snow. So it became a day off for adults as well.

"It's a moment of relief for all of us," said Avital, an Israeli woman in her 20s, as she built a snowman — complete with a broom and carrot nose — on a traffic island in downtown Jerusalem.

In the Old City, a young Palestinian, Kaed Suweiti, was especially jazzed up about the snow; it came on his 25th birthday. Getting snowed on near Damascus Gate, he said he felt the white gusts had erased the region's problems.

A shopkeeper in the Muslim Quarter lit charcoal in an empty tomato can to warm his hands and the smoke filled a tunnel alleyway. For the man, 25-year-old Ali Natche, the snow was one of those simple things, like a holiday or a visit from a friend, that brought some joy in difficult days. "People are happy for a few days because of the snow," he said.

Just to the south in the West Bank town of Bethlehem, for once the weather was more to blame for keeping people indoors than an Israeli military curfew.

Robed monks wearing gloves wiped snow from the main gate of the Church of the Nativity, marking Jesus' traditional birthplace.

Snow piled up in northern Israel and on the mountains of Lebanon and hills of Jordan, where the storm also came with lightning and thunder.

The Tel Aviv-Jerusalem and the Beirut-Damascus roadways were closed. The highway linking the Lebanese and Syrian capitals, which snakes through mountain passes, is one of Lebanon's busiest and its main link with the Arab world. Parts of Beirut were without power.

In Jerusalem, the main Jaffa Street thoroughfare was abandoned except for the occasional car that came skidding along. Three girls hurled armfuls of snow at cars, including a border police jeep that answered with a blast of its siren.

At the Western Wall, Judaism's holiest site, a few worshippers in the traditional black coats and hats of the ultra-Orthodox pressed shivering, gloved hands against the stones.

The plaza in front of the wall, blistering hot and shadeless in the summer, was filled with boot-high slush. A border policeman carrying an M-16 rifle in the plaza hurled a snowball that landed with a loud thud on the leg of a colleague.

One man wearing puffy earmuffs shielded himself against the flakes with a prayer shawl. Half a dozen men linked hands and danced in a circle to sing "Am Israel Chai," or "The People of Israel Live." Others posed for pictures.

Tourist Matthew Feder, 45, from Rosendale, New York, got stranded here because of the snow, so he headed for the Wall. "This is my first time in Israel and it's truly been a life-changing experience, especially now with the snow," he said.

Israel's parliament convened Tuesday, as planned, with legislators brought to the Knesset by all-terrain vehicles.

Meteorologists issued flood warnings for Israel's coastal plain and the Negev Desert, while Israel's Red Sea resort of Eilat, at the country's southernmost tip about 200 miles south of Jerusalem, was untouched by the storm.

In Lebanon, mudslides were reported and rivers burst their banks. Officials opened drains at the Qaroun Reservoir on the Litani River in the southern Bekaa Valley to relieve the pressure on the dam after waters had risen to a level unseen in decades.

A Civil Defense spokesman in Jordan said rescue teams rushed to help more than 600 people, including French and other European tourists caught in snow or floods at several tourist sites. Visitors, he said, were helped from the snowed-under Roman ruins of Jerash, 17 miles north of Amman.

In Syria, snow covered the Qassion mountain overlooking Damascus for the first time in years. Flooding elsewhere in Syria damaged homes and farmland.

Off the Israeli coast, meanwhile, the Turkish freighter Kamal Okan sank in rough seas after its anchor chain broke and it drifted away from the Israeli port of Ashdod, foundering 10 miles off the coast. The Israeli rescue service Magen David Adom said all 10 crew members brought safely ashore on tugboats. The military said air force helicopters took part in the rescue.