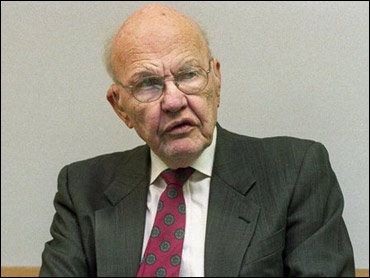 In his first year working at Texas Instruments in 1958, Jack Kilby borrowed some equipment and created a fingernail-size device that would revolutionize the way the world communicates.

Kilby's invention of the integrated circuit opened the way for the microchips that are the brains of today's computers, video games, DVD players and cell phones.

"In my opinion, there are only a handful of people whose works have truly transformed the world and the way we live in it Henry Ford, Thomas Edison, the Wright Brothers and Jack Kilby," TI chairman Tom Engibous said in a statement Tuesday.

Kilby, who won the 2000 Nobel Prize in physics for his work, died Monday after a battle with cancer, according to Texas Instruments, where Kilby worked for many years. He was 81.

The Nobel citation said Kilby's work "has laid the foundation of modern information technology, particularly through their invention of rapid transistors, laser diodes and integrated circuits."

Kilby's integrated circuit, in which all the components were fabricated in a single piece of semiconductor material half the size of a paper clip, was a forerunner of the microchip used in today's computers. It replaced the bulky and unreliable switches and tubes that had been used in the first computing devices.

Sales of integrated circuits totaled $179 billion in 2004, supporting a global electronics market of more than $1.1 trillion, according to TI.

Kilby's more than 60 U.S. patents included one filed in 1959 for an integrated circuit made of the element germanium. A few years later, Robert Noyce of Fairchild Semiconductor received a patent for a similar but more complex circuit made of silicon. Noyce later co-founded Intel Corp., whose chips are used in many of today's computers.

After winning the Nobel, Kilby said of his invention: "I thought it would be important for electronics as we knew it then, but I didn't understand how much it would permit the field to expand."

He said he never craved fame or wealth.

"I think it just happened," Kilby said in a 2000 interview with The Associated Press. "It wasn't deliberate. I didn't say 'Inventors are nice and I want to be one.' I just think if you work on interesting projects, invention is kind of a natural consequence."

He received the National Medal of Science in 1970, and in 1982 he was inducted into the National Inventors Hall of Fame.

Kilby spent his later years as a consultant to TI, working on industry and government assignments throughout the world.

Kilby is survived by two daughters, five granddaughters, and a son-in-law.