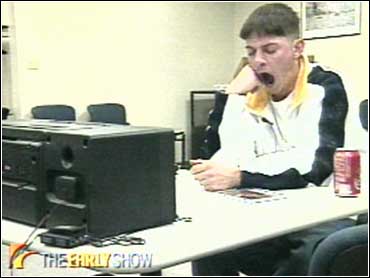 While Danke Schoen and Wayne Newton's other hits may be music to the ears of some Americans, they were punishment Tuesday for 18-year-old Justin Rushford.

The Michigan teen was sentenced to two hours of hard listening after he was busted for playing rap music too loudly on his car stereo, a violation of the local ordinances. He also was charged with driving with an obstructed view - fuzzy dice hanging from his rearview mirror.

The charges could have carried a fine of up to $1,000 and up to 90 days in jail but Judge Michael Martone of Troy, Mich., had other ideas.

"It just seemed like the right thing to do to this young man," the judge said on the CBS News Early Show. "Let's face it. This isn't the most serious crime in the world.

"It does annoy people, and it started when he had the fuzzy dice hanging from his mirror and I immediately thought of '50s music."

At first, Rushford thought the judge was joking. "I didn't think he was serious. I had to ask him if he was serious. He was kind of chuckling a little bit," the teen recalled.

Martone is known for unusual sentences. He once ordered a teen-ager accused of possessing alcohol to watch an autopsy.

"He was caught three times within three months of his 18th birthday possessing alcohol, and if you get caught three time, within three months, imagine how many times you're drinking," the judge said. "I put him on probation and the young fellow said, 'I don't need you to baby-sit me.' I said, 'I don't think you understand,' and the dialogue went to such a point that I said, "You know, you're going to witness an autopsy.' "

The judge said he didn't expect Rushford's sentence to be torture but he did expect it to be uncomfortable. "I thought it was at the opposite end of his musical taste. I couldn't imagine him saying, 'Give me the Beastie Boys and, oh yeah, give me a couple Wayne Newton CDs.' "

Rushford admits to finding the music a little sleep-inducing. " I went in there in the morning and was a little tired," he said. "All the people were catching me yawning a little bit."

The judge at first ordered Rushford to listen to it at top volume, but later sent one of the secretaries back to ask that he turn the music down.

"When he went back into the next courtroom to, you know, do the stuff he does in court, it was too loud," Rushford said. "They could hear it."

Asked to comment on the sentence, Newton said, "The judicial system has given the judge the right to mandate whatever sentence he thinks is appropriate. I'm just glad he has such great taste in music."

After listening to Newton's music for two hours, Rushford had a favorite - Remember When. "It had a weird beat to it. It sounded like something new, but something old."

As for playing loud music, Rushford says he won't do it again. "Especially not in residential areas where people are lving and outside all the time. I'm not going to do that."