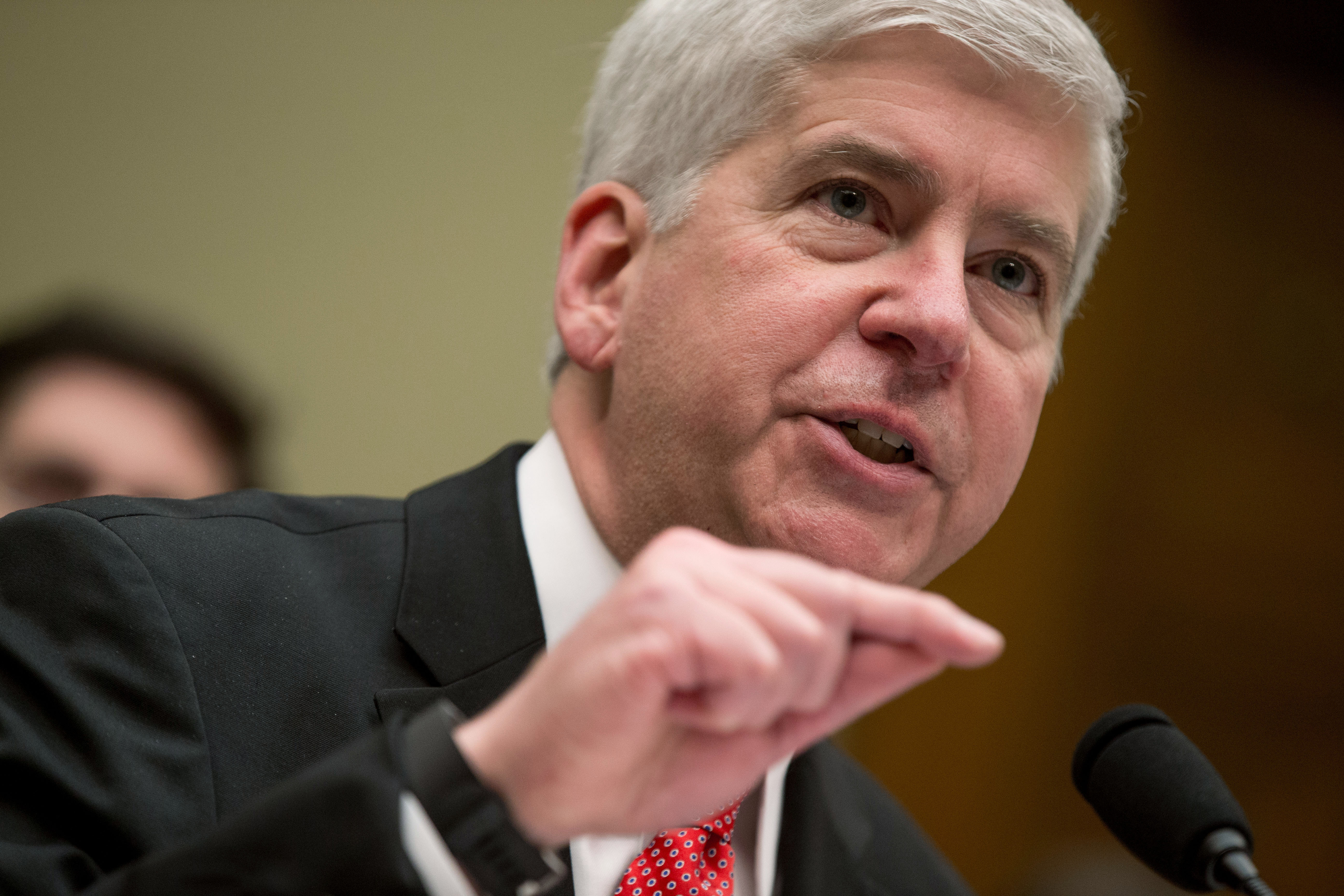 LANSING, Mich. -- Michigan Gov. Rick Snyder willdrink Flint water at home and at work for at least a month to show to residents it is safe with the use of a faucet filter, he said Monday.

The Republican governor, who has apologized for his administration's role in the city's lead-tainted water crisis, visited a house owned by Cheryl Hill and Todd Canty that was confirmed to have high levels of lead. Snyder, who left with five gallons of filtered water, said he understands people feel that if officials say the water is okay, then he should drink it, too.

"What better way to help show support," said Snyder, who will get refills from other homes as needed.

Hill and Canty told The Flint Journal that they appreciate the governor's visit but still have a lead service line running to their home and don't know if and when it will be replaced.

"I wouldn't want to be in his position right now," Canty said. "I believe this is just one of those cases where personally he just has a lot of work to do."

For nearly 18 months, Flint residents drank and bathed with improperly treated water that had coursed through aging pipes and fixtures, scraping away lead.

By the time Snyder announced in October that Flint would return to its earlier source of treated water, the Detroit municipal system, dangerously high levels of the toxic metal were detected in the blood of some residents, including children, for whom it can cause lower IQs and behavioral problems.

On Monday, Snyder again urged residents to drink the water as long as a filter is in place. The U.S. Environmental Protection Agency, however, says bottled water is safest for children under age 6 and pregnant or breastfeeding women.

Data released in February found that as of January 2015, the yearly water bill for a resident of Flint came to $864.32, roughly $500 more than what the average U.S. household paid for water from other public utilities, according to Food & Water Watch.

The advocacy group reviewed the 500 largest U.S. community water systems. On the other end of the spectrum, the report says household water use was most affordable in Phoenix, Arizona, where the annual tab came to $84.24.

The report found large, for-profit owned systems charge 58 percent more than large publicly owned ones, with 87 percent of U.S. water customers getting their water from the latter.

In April 2014, the city shifted its water source from Detroit to the Flint River, a cost-cutting move that resulted in corroded pipes causing lead poisoning and a Legionnaires' disease outbreak that killed at least nine people and sickened 78.

Meanwhile, a state water-quality official who told the city of Flint that a chemical wasn't needed to prevent lead corrosion from pipes has taken a different job in the state Department of Environmental Quality.

Mike Prysby, who was a district engineer with the Office of Drinking Water and Municipal Assistance and had been responsible for Genesee County, home to Flint, began working in the Water Resources Division's Transportation and Flood Hazard Unit on March 28. That was the day before a supervisor at Flint's water plant, Mike Glasgow, testified at a legislative hearing that Prysby told him before Flint switched to a local river for water in 2014 that phosphate wasn't required.

DEQ spokeswoman Melanie Brown said Prysby took a position that opened up when someone was promoted, and his switch was not a forced transfer.

"The department continues to cooperate with internal investigations regarding staff actions in Flint," she told The Associated Press in an email.

A message seeking comment was left Monday for Prysby, who has declined previous requests for an interview.

Snyder has blamed "career bureaucrats" in state and federal governments. A task force appointed by Snyder has said the DEQ was the primary culprit because regulators misinterpreted a federal rule in telling Flint water officials not to treat the Flint River for corrosion until after two six-month monitoring periods.

The DEQ's director and communications director resigned in December. Snyder fired the department's top drinking water official, and a district supervisor is on paid leave after being suspended five days without pay in January for actions related to the Flint crisis -- the maximum allowed under civil service rules.