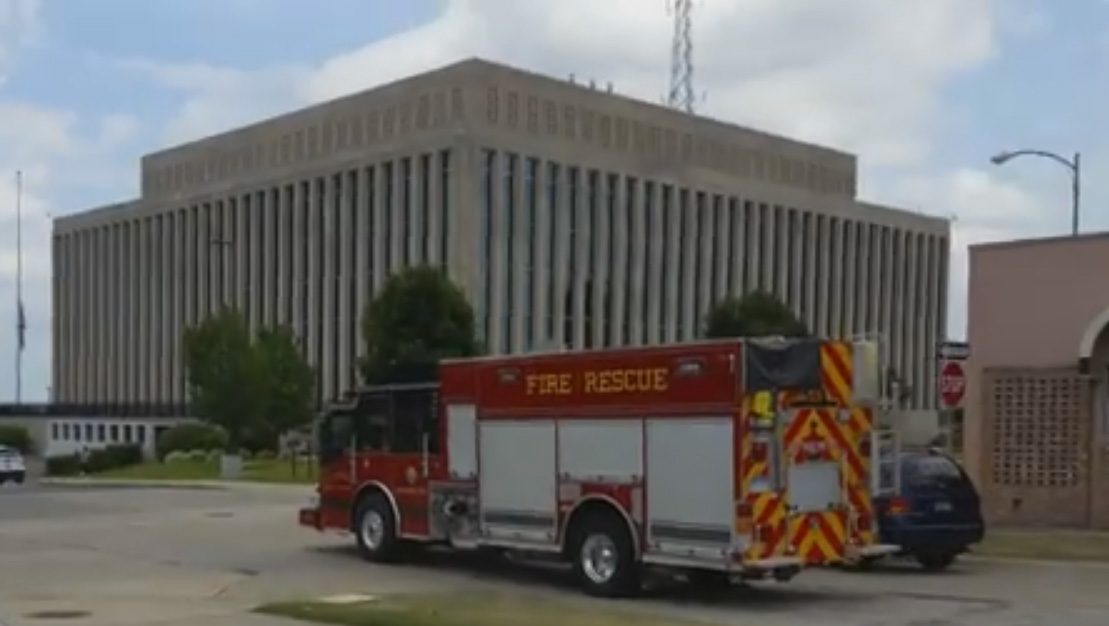 ST. JOSEPH, Mich. -- An inmate charged with violent crimes was handcuffed when he wrested a gun from a sheriff's deputy and killed two bailiffs at a southwestern Michigan courthouse, a sheriff said Tuesday.

Berrien County Sheriff Paul Bailey said he had wrong information Monday night when he told reporters that Larry Darnell Gordon was not restrained during his deadly escape attempt as he was being escorted from a holding cell to the courtroom in St. Joseph, about 100 miles northeast of Chicago.

"After further investigation from the crime scene techs, the suspect in this incident was handcuffed in the front," Bailey said.

Bailey said a fight broke out in a non-public area of the courthouse Monday afternoon, giving Gordon, 44, the opportunity to disarm Deputy James Atterberry Jr. He provided no information on how that happened except to say that "it's not an easy thing to do."

People scrambled for cover after Gordon, who was locked up on several felony charges, shot Atterberry, then killed Joseph Zangaro, 61, and Ronald Kienzle, 63, both retired police officers. He also shot a woman in the arm, the sheriff said.

Bailey said Gordon took hostages for a short period before trying to leave through another door. The inmate then was fatally shot "by two other bailiffs who came to render aid, along with several other officers," Bailey said.

"He was trying to escape," the sheriff said.

Gordon was charged in April with kidnapping, assault with a dangerous weapon and criminal sexual conduct, according to state police records. No other details were immediately available Tuesday.

"He's always been cooperative the entire time he was here," Bailey said of Gordon's stay in jail while the case was pending.

Zangaro was head of court security. He retired from the Michigan State Police as commander of the Bridgman Post. Kienzle retired as a sergeant in the Benton Township police department after serving in the U.S. Army.

In 2011, Zangaro told The Herald-Palladium newspaper that security staff had a "ton of experience," more than many police departments.

"Probably 90 percent of the people who are here don't want to be," he said of people with business in the courthouse. "They have either a criminal issue, a civil issue or a family issue, and those become very emotionally charged sometimes."

The courthouse was closed Tuesday but was expected to reopen Wednesday.

Gordon's ex-wife, Jessica Gordon, told WOOD-TV and the Detroit Free Press that he likely was trying escape to see his family. She added that he was "not a monster," but "an amazing man that got mixed up with the wrong people."

Jessica Gordon said they divorced earlier this year but he remained close with his 6-year-old daughter. His ex-wife said she spoke with him Sunday and had no indication he was planning an attack.

Gov. Rick Snyder cut short a visit to Midland and traveled across the state to St. Joseph - a city of about 8,300 people - to meet with investigators and victims' families.

Snyder called it a "terrible day in a wonderful community. ... This is a particularly tough time for law enforcement. So I ask that everyone reach out and try to be as supportive of law enforcement across the state and across the country as possible in a difficult case like this."

Marcus Muhammad, mayor of nearby Benton Harbor, said "together, we can pull through it and hopefully come out stronger."