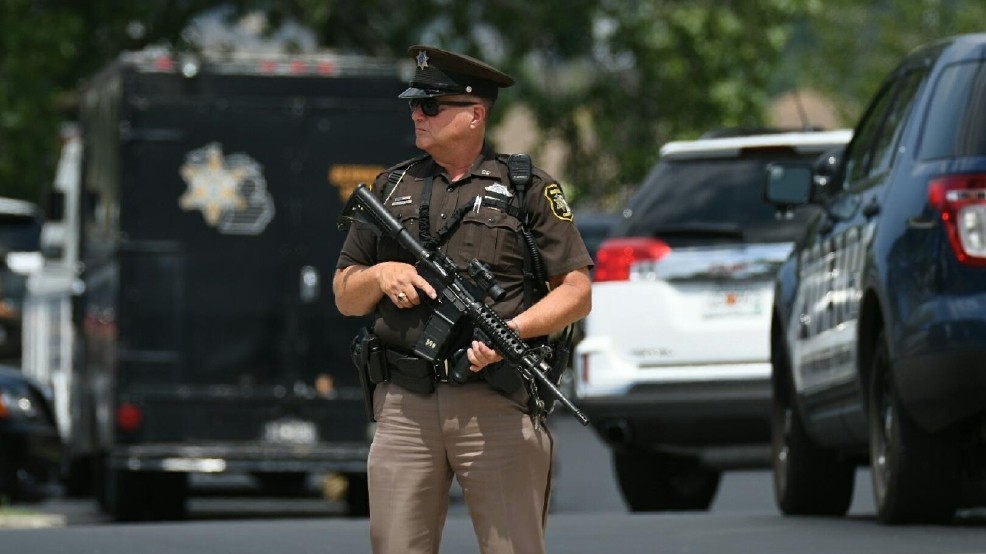 ST. JOSEPH, Mich. -- A jail inmate trying to escape from a western Michigan courthouse wrested a gun from an officer Monday, killing two bailiffs and injuring two more people before he was fatally shot by other officers, a sheriff said.

Two bailiffs were killed in the shooting at the Berrien County Courthouse in St. Joseph, Michigan, CBS affiliate WSBT reported. A deputy sheriff was also shot and is in stable condition.

People inside the building scrambled for cover at the Berrien County Courthouse in St. Joseph in the southwestern corner of Michigan, about 100 miles northeast of Chicago.

"Our hearts are torn apart. ... I have known them for over 30 years. It's a sad day," Sheriff Paul Bailey said of the bailiffs.

Bailiffs killed in the shooting were longtime law enforcement officers who became court officers after retiring from their departments.

Bailey identified the bailiffs late Monday as 61-year-old Joseph Zangaro and 63-year-old Ronald Kienzle. He said they were "close friends" of his.

Zangaro was head of court security. He retired from the Michigan State Police as commander of the Bridgman Post in Berrien County. Kienzle retired as a sergeant of the Benton Township police department after serving in the U.S. Army.

Wounded in the shootings was Deputy James Atterberry. He remains in stable condition at Lakeland Hospital.

Bailey said all indications are that the inmate was trying to break out of custody.

He said the 44-year-old suspect, Larry Darnell Gordon, was at the courthouse for a hearing on multiple felony charges.

The sheriff said authorities had "no warning signs" that the suspect would be violent.

During the incident, Bailey said Gordon took hostages for a short period of time before trying to leave through another door. He was killed by other officers.

"He was trying to escape," the sheriff said.

Bailey said a deputy who was injured in the shooting is "doing fine" in intensive care after surgery. A woman was also injured. Her name and condition weren't immediately provided.

The ex-wife of Gordon said she spoke with him Sunday and had no indication he was planning an attack.

Jessica Gordon told WOOD-TV hat her ex-husband was "an amazing man that got mixed up with the wrong people."

Jessica Gordon said he was probably afraid of going to prison and wanted to "get home to our baby girl."

In a video posted to Facebook by Greta Volkenstein, police are seen responding amid a chaotic scene outside the courthouse.

Appearing with Bailey and other law enforcers, Gov. Rick Snyder called it a "terrible day in a wonderful community."