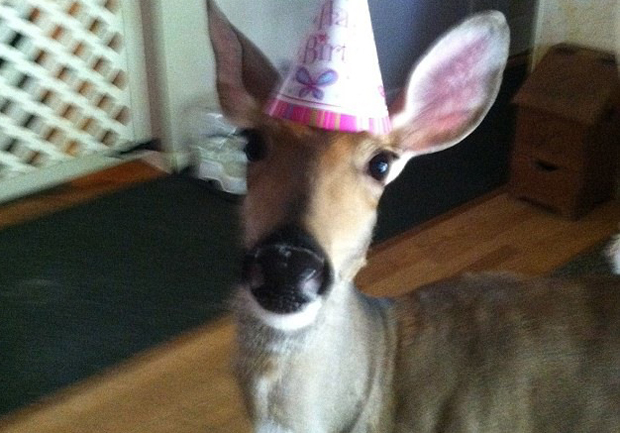 Lilly the deer gets to stay home.

Pictured in a party hat, the white-tailed doe grabbed hearts and headlines across the country when -- after 5 years of living with her human family -- her fate was suddenly uncertain, CBS Detroit reports.

Tipped off by a neighbor's friend, the Michigan Department of Natural Resources said they would have to move Lilly to a suitable facility because, under state law, families cannot keep wild animals as pets.

According to the family's attorney, Valdemar Washington, a deal has now been reached with the DNR that will allow Lilly to remain in her home.

Washington told WWJ Newsradio 950?s Sandra McNeil the change of heart by the state took a lot of diplomacy.

"The reality is that the DNR didn't do anything wrong. The way that the rules and the laws in the state were structured at the time they were giving the correct response," Washington added.

The DNR says Lilly's caretakers must have their home registered as a privately owned facility for deer or elk and must adhere to the requirements of a state law that governs private ownership of deer.

The Genesee County couple, who want to remain anonymous, rescued Lilly who was born on the side of the road as her mother was dying following a car crash. Police at the time allowed the family to care for the fawn, saying she would probably die anyway.

"I don't think eccentric captures it," Washington said. "Because I think their initial involvement was well-intended: 'Can we save this fawn's life?'"

Lilly's caretakers say they recognize Lilly's circumstances are unique and the way she became a member of their household "was not authorized by any rule, or law of the State of Michigan." In a statement posted to their website, the family asks that others follow the rules and immediately seek "the guidance and direction of the Michigan Department of Natural Resources before taking any individual action related to any wild animal."

Thousands of people signed petitions at Change.org and several social media pages were made -- all dedicated to saving the deer, who the family feared would be put down if a new home could not be found.

"Just thank all of your listeners who were supportive. I know that a lot of people sent in signatures and likes on Facebook," Washington said.

DNR wildlife biologists say, no matter how domesticated a wild animal may appear, they can still pose significant risk to the public. The department has always urged people, especially during the spring when baby animals are more visible, to leave wildlife in the wild.

Lilly now wears a pink collar with a DNR tag.