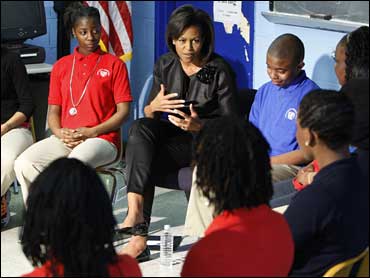 (AP)
As a kid growing on the south side of Chicago, Michelle Obama remembers being ridiculed for trying to be educated and get good grades.

"I wanted an "A". I wanted to be smart. I wanted to be the person who had the right answer. And I didn't care if it was cool - 'cause I remember there were kids around my neighborhood who would say 'ooh - you talk funny. you talk - like a white girl.' I heard that growing up my whole life."

It was the First Lady's way of encouraging a dozen kids at an inner city high school in the nation's capital, to pursue better lives – no matter what anybody thinks.

In a candid and revealing chat with students, ten girls and two boys, mostly juniors and seniors at Anacostia H.S., Mrs. Obama spoke of her life, family and values. It was part of a day of outreach marking Women's National History Month.

(AP Photo/Pablo Martinez Monsivais)
At her urging, other prominent women fanned out from the White House to schools in Washington – to tell their stories of success and setbacks. They included singers Alicia Keyes and Sheryl Crow, actors Phylicia Rashad, Alfre Woodard and Fran Drescher; even four star army general Ann Dunwoody.

Mrs. Obama told her group about the importance of discipline and how she tries to instill it in her daughters.

"At least my mother taught me that there was nothing more important than going to school and going on time and doing your homework." And that goes for her daughters too.

"They have to get up, set their alarms, get their own breakfast, make up their beds, put on their clothes and get to school on time."

Even if she or the President are doing something, school comes first for Malia and Sasha. "We try not to pull them out of their routines."

The First Lady encouraged her group of students to at least think about going to college. She told them they need not know now what they want to do in life. College is for exploring, she said. And never be shy about asking for assistance.

"What I tell my kids is - ask for help. Never be embarrassed. I mean this is when I'm having conversations with my little one - 'cause she's a little stubborn - and she likes to be right all the time. And sometimes she will say she knows something - that she doesn't even need to know. She's seven. I keep telling her: you're seven! You don't know how to multiply - 'cause you're seven. There are things she thinks she should know - and I'm just trying to teach her that you can learn anything if you ask for help."

As a youngster, Mrs. Obama lived near the campus of the highly-respected University of Chicago. But as a local kid, she said she didn't feel a connection with the school.

"I think the assumption was - that place was different. It was a college and it was a fancy college. And it didn't have anything to do with me."

She doesn't want kids who live in the District of Columbia to feel that way about the White House.

She said she wants to be "a part of opening up the doors and taking off the veil and saying 'this is what's going on there.' And one of the best ways – most fun ways to do that - is to come and see you all."

And this evening, she'll open the doors of the White House to more of those kids – hosting a dinner and show for them.

"Many young people will have never set foot in this place, never could have imagined that they'd be dining in the East Room with so many great people," Mrs. Obama told the other women in her project before they set out for local schools.

"Just imagine what they're going to feel like at the end of this day," she said.