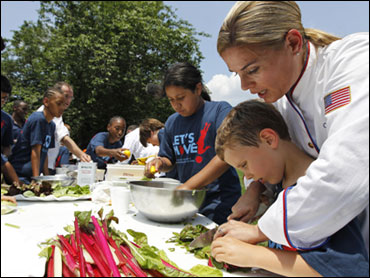 School lunches that are good for kids and that kids will actually eat? That's a job for America's top chefs.

Mrs. Obama is asking the chefs to partner with individual schools and work with teachers and parents to help educate kids about food and nutrition. She said healthy meals at schools are more important than ever because many children get most of their calories there.

"You can make a salad bar fun; now that's something," she said.

Rachael Ray, Tom Colicchio, Cat Cora and other celebrity chefs joined Mrs. Obama and children from a local school. They picked arugula, baby spinach, rhubarb and other vegetables from her garden on the lawn and showed the children how to wash, dice and cook the veggies as they all made a grilled chicken salad and rhubarb strawberry crisp together.

She also said they'll have to be patient, learning about the communities and understanding the schools.

That advice could have been with celebrity chef Jamie Oliver in mind. British chef Oliver, who did not attend the event, recently turned his own effort to transform the unhealthy diet of school children in a West Virginia town into a hit reality television program. Many in the town were resistant to the effort, including some who worked in the school cafeterias.

"They're going to need your support, but it's got to be a collaboration," she said. "And we strongly encourage you all to go in with that spirit."

Chef Todd Gray of the Washington restaurant Equinox spoke about his recent experience partnering with a local school. As part of his project, students planted corn, squash and beans to learn about ancient civilizations, learned about decomposition by making real compost worms and all - and sketched the school garden in art class.

"It will change your life professionally and personally," he told the other chefs.

Mrs. Obama also used the event to encourage Congress to pass a school nutrition bill. Legislation that passed a Senate committee earlier this year would ask the Agriculture Department to create new standards for all foods in schools, including vending machine items, to give students healthier meal options. It would also expand the number of low-income children eligible for free or reduced cost meals.

"Everyone out there needs to focus on this," Mrs. Obama said. "This is doable. It's right there. But we've got to make it happen."