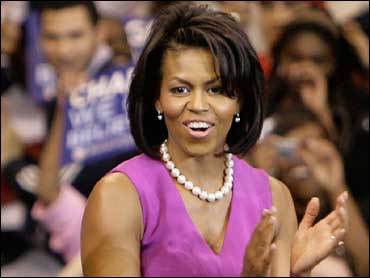 This story was written by Carrie Budoff Brown.


It's less than a week into the general election campaign, but already Michelle Obama is a Republican target.

Former Secretary of State Lawrence Eagleburger leveled the first blow, introducing Republican John McCain's wife at a fundraiser this week as someone who is "proud of her country, not just once but always." Obama wasn't mentioned by name, but the audience got it.

The dig signaled the start of what Democrats expect will be a concerted effort to cast Michelle Obama - and, by extension, Barack Obama - as an unpatriotic radical. It also pointed out the urgency to define Michelle Obama to general election voters before the opposition goes too far in doing it for her, strategists said.

"We live now in an era where everything and everyone is fair game," said Douglas E. Schoen, who was a pollster and adviser to former President Bill Clinton from 1994 to 2000. "It is certainly the case that Teresa Heinz Kerry was probably not an asset in John Kerry's campaign, at least publicly, and the jury is still out on how the public will view Michelle Obama."

Despite being a steady presence at her husband's side on primary election nights, and sitting for occasional media interviews, Michelle Obama remains an unfamiliar figure to most voters, strategists said. When she campaigned in recent months, it was almost always alone and in small settings. The most sustained attention she received on cable news shows was for her controversial February statement leaving the impression that she wasn't proud of her country until this year.

"There is no reason to expect her to have a brand. But the campaign needs to start doing that," said Erik Smith, a Democratic strategist and aide to former Rep. Richard Gephardt during his 2004 presidential campaign. "Defining Michelle Obama goes a long way in defining Barack Obama. I am sure it is a campaign priority."

Indeed, when the campaign launched a website today to combat rumors about Barack Obama's patriotism, his religion and his family, the first entry dealt with his wife.

Other efforts are on tap. She joins the candidate Friday for a roundtable in Ohio with senior citizens and appears as a guest host next week on "The View," the popular daytime talk show, giving her access to friendly, high-profile platforms. Campaign aides said they are "staffing up across the board," including for Michelle Obama - a move that Schoen said reflects the need to "manage the image and utterances of the spouse."

The heightened scrutiny "requires a level of staffing and attention to detail that goes beyond what spouses have typically gotten," Schoen said.

Most voters likely won't decide which candidate to support based on wives. Only 22 percent of respondents in a Rasmussen Reports survey released Wednesday said their perception of the spouse is very important to how they vote. But the more people learn about her, the more people understand her husband, strategists said.

The Rasmussen survey showed Michelle Obama, at this point, as a more polarizing figure than Cindy McCain. Forty-eight percent of voters hold a favorable impression of the presumptive Democratic nominee's spouse, while 42 percent view her unfavorably, including a "startling" 25 percent with a very unfavorable opinion, Rasmussen wrote in its release.

Cindy McCain earned a favorable assessment from 49 percent of voters and an unfavorable review from 29 percent, including 10 percent who held a very unfavorable opinion.

Michelle Obama receives lower ratings than first lady Laura Bush did during the 2004 campaign but fares better than did Heinz Kerry, whose numbers dropped as Election Day drew closer. Obama is drawing comparisons to another presidential spouse: Hillary Rodham Clinton, who, like Obama, was 44 years old, was Ivy League-educated, earned more money than her husband and raised a child in the spotlight. Clinton also became a lightening rod for the conservative right.

But unlike 1992, the debate isn't a proxy battle about the traditional bounds for women. Obama, to a greater degree than Clinton, makes her family life the centerpiece of her public image, talking frequently about family-work life balance and her two young daughters.

This time, the criticism is rooted in a combustible mix of race and patriotism.

The Obama campaign and PolitiFact, an independent fact-checking website, have debunked chain e-mails in the last month claiming she advocated racial separatism in her college thesis. Long the domain of rumors about her husband, the e-mails also focused on her February remark: "For the first time in my adult lifetime, I am really proud of my country."

Michelle Obama later clarified her statement, saying that her pride was in the political process and that she was "absolutely" always proud of the country.

The Tennessee Republican Party picked up on the remark, however, and posted a Web video last month that juxtaposed her statement with average voters claiming pride in their country.

The video reaped considerable national media attention and drew a sharp response from Barack Obama ("Lay off my wife," he said at the time). He did the same last week when he was forced to respond to rumors of a video showing his wife using a derogatory term for white people.

"There is dirt and lies that are circulated in e-mails, and they pump them out long enough until finally you, a mainstream reporter, asks me about it," Barack Obama said to a reporter who asked about the purported video, for which there is no evidence to support its existence. "That gives legs to the story. If somebody has evidence that myself or Michelle or anybody has said something inappropriate, let them do it."

His comments followed a month of chatter from conservative pundits that the video's release was imminent. The fact that Barack Obama was personally pressed on the matter is said to be a reason why the campaign launched the website, which states on the front page: "No Such Tape Exists."

Chris Lehane, a veteran of Bill Clinton's 1992 presidential campaign, said the Obama campaign faces a choice similar to the one they faced with Hillary Clinton. As she, too, became a target of Republicans, "we made the decision to put her out there and not go into the bunker," Lehane said.

The campaign gave her "an entire support system," including more than a dozen aides, he said. By the late summer, attacks on Hillary Clinton at the Republican National Convention backfired as polls showed the criticism had turned off moderate and independent voters.

"They are going to try to make her a focal point of the campaign," Lehane said of Michelle Obama. The McCain campaign will likely avoid attacks, but independent expenditure groups "will take selectively used phrases, manipulate and exploit them."

The biggest concern for McCain, said a Republican media consultant, "will be controlling renegade county chairmen and people who have a tendency to be less disciplined about the right thing to say."

"This is an area where people have to be extremely careful," said John Brabender, who is serving as an informal adviser to the McCain campaign. "Voters have grown to believe that spouses are often well off-limits."

Campaign aides said they expect Michelle Obama to maintain her schedule of several days a week on the campaign trail, at least until her daughters finish the school year. They view her as Barack Obama's best character witness, introducing him as a father and a husband, and making connections with other women, particularly as the campaign attempts to lock down Clinton voters.

Tucker Bounds, a McCain spokesman, said the Arizona senato is "committed to running a respectful campaign" that is focused on the issues. Bounds, however, did not respond to a request for comment on Eagleburger's remark.

"She is more likely to be an issue during the slow summer months than the real campaign after Labor Day," Brabender said. "It is a distraction that campaigns can just not afford."
By Carrie Budoff Brown