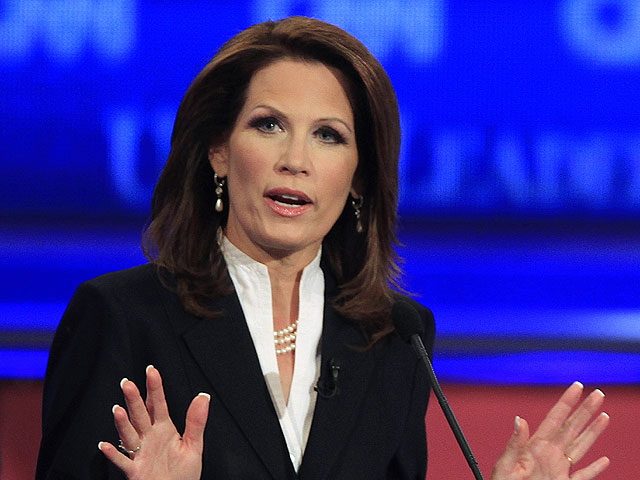 Flying under the radar at the first debate with all of the top GOP presidential contenders, Minnesota Rep. Michele Bachmann (R-Minn.) showed why she's been the darling of the Tea Party movement and proved that she's vying not to be just an also ran in the election.

Her down-home folksiness and easy going demeanor allowed her to capture the attention of the audience and stand out among a crowd of serious and sometimes stiff candidates on the stage in New Hampshire. It didn't hurt that Bachmann was the only woman among the seven candidates and her slightly shorter stature allowed her to fly under the radar and steal the thunder from the more known and polished candidates.

"It's a thrill to be here tonight in the live free or die state" she said to opening applause in her introductory statement.

She quickly hit her stride attacking government regulation. She called the Dodd-Frank wall street reform bill "over-the-top" and said it will "actually lead to more job loss." And hit on early on her favorite line of attack, on President Obama's health care reform. While the other candidates often spoke of serious policy issues and disagreements, Bachmann kept her answers conversational, folksy, and casual, but direct.

"I want to make a promise to everyone watching tonight, as president of the United States: I will not rest until I repeal Obamacare. It's a promise, take that to the bank, cash the check, I will make sure that that happens," she said.

Bachmann quickly honed her attack on the Obama administration's penchant for government regulation at the expense of job creation.

"What could the president be thinking passing a bill like this, knowing full well it will kill 800,000 jobs," she asked about health care reform, citing a government study for the statistics.

"Every time the liberals get into office, they pass an omnibus bill of big spending projects, what we need to do is pass the mother-of-all repeal bills but it's the repeal bill that will get at job killing regulations," she added, saying the Environmental Protection Agency should be renamed the "Job Killing Organization of America."

When asked about the influence of the tea party, the chair of the House Tea Party caucus hit her stride.

"It's a wide swath of America coming together, I think that's why the left fears it so much, because its people who simply want to take the country back, they want to country to work again," she said of the Tea Party movement.

But she didn't stop there.

"No question this election will be about economics. How will we create jobs?... It's a great story for Republicans to tell, President Obama can't tell that story... Republicans have an awesome story to tell," she said, noting the tea party's focus on the economy. But she asked Republicans to join together.

"We need everybody to come together. Because we are going to win! Make no mistake about it. I want to announce tonight: President Obama is a one-term president," she said to boisterous applause. Camera shots of the crowd showed more smiles and approval for that line than at any other time in the debate.

Bachmann started the night with announcing her official candidacy, saying she filed the paperwork to declare her candidacy with the Federal Election Commission.

CNN host John King explained to the crowd what her filing was compared to the other candidates and joked, "I'm sure they welcome you to the fray"

Little did they know that Bachmann's easy-going, friendly demeanor coupled with her serious but not wonky policy discussions showed after the first debate that her voice will have an impact on the race whether they welcome it or not.