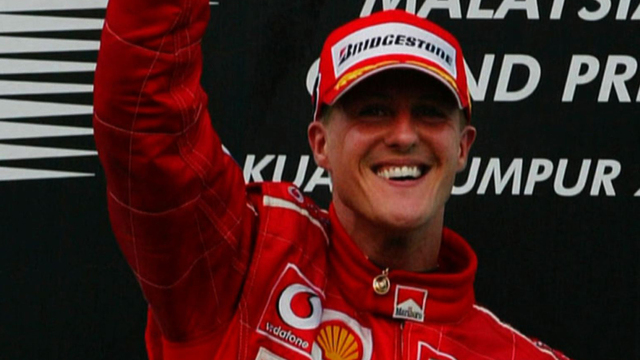 Chief anesthesiologist Jean-Francois Payen told reporters the seven-time racing champion is still in a medically induced coma. He said the medical team was focusing only on his current condition.

"We cannot predict the future for Michael Schumacher," Payen said.

"He is in a critical state in terms of cerebral resuscitation," he added. "We are working hour by hour."

Schumacher, the most successful driver in Formula One history, arrived at the Grenoble University Hospital Center a day earlier already in a coma and immediately underwent brain surgery.

"We can say that his condition is life-threatening," Payen told a news conference. "For the moment, we cannot say what Michael Schumacher's future is."

The German driver was skiing with his son Sunday morning in the French Alpine resort of Meribel when he fell and hit the right side of his head on a rock. He was wearing a helmet, but the doctors said it was clearly not sufficient to prevent a serious brain injury.

"Someone who had suffered this accident without a helmet would not have made it this far," Payen said.

Gerard Saillant, a trauma surgeon who operated on Schumacher when he broke his leg in a race crash in 1999, was at the hospital. But he said he was there in his capacity as a friend, not a doctor. He did, however, tell reporters that Schumacher's age - he turns 45 on Jan. 3 - and his fitness should work in his favor.

But the Grenoble medical team was being very cautious about Schumacher's prognosis. They are working to relieve pressure on his brain and have lowered his body temperature to between 93.2 to 95 degrees Fahrenheit, as part of the medically induced coma.

The area where Schumacher was skiing is part of a web of trails that slice down through a vast and, in parts, very steep snowfield. Although challenging, the snowfield is not extreme skiing: The runs are broad and neatly tended, and the ungroomed area in between, known as off-piste, is free of trees.

Schumacher was conscious when first responders arrived on the scene, although agitated and in shock, according to the resort. He was airlifted to a local hospital and then later brought to Grenoble.

His wife and other family members are by his bedside. But his manager, Sabine Kehm, said reports that Jean Todt, his former Ferrari team boss and now president of motorsport's governing body, the FIA, and Ross Brawn, who worked with Schumacher at Ferrari and Mercedes F1 teams, were at the hospital, were wrong.

Schumacher has been seriously hurt before. He broke his leg in a crash at the Silverstone race course in 1999. He also suffered serious neck and spine injuries after a motorcycling accident in February 2009 in Spain.

As news of the accident spread, Formula One drivers rushed to wish Schumacher a quick recovery.

"Like millions of Germans, the chancellor and members of the government were extremely dismayed when they heard about Michael Schumacher's serious skiing accident," German Chancellor Angela Merkel's spokesman, Steffen Seibert, said in Berlin.

Sebatian Vettel, who was once referred to as "Baby Schumi," told German news agency dpa, "I am shocked and hope that he will get better as soon as possible."

Former Ferrari teammate Felipe Massa, who himself recovered from life-threatening head injuries at the Hungarian Grand Prix in 2009, wrote on Instagram: "I am praying for you my brother!! I hope you have a quick recovery!! God bless you Michael."

Romain Grosjean of Lotus tweeted: "All our thoughts to Schumi and his family! Hope you will recover soon #legend #Schumi."

Support also came from leading German sports personalities, ranging from the NBA to soccer. Dallas Mavericks power forward Dirk Nowitzki said his thoughts were with Schumacher, while Lukas Podolski, who plays for Arsenal in the English Premier League, tweeted: "Bad news from Switzerland: please get well soon, Michael Schumacher. All the best for you, my friend! #getwellsoon #MichaelSchumacher."

Boris Becker, the retired tennis champion now working with Novak Djokovic, posted: "Let us all pray for realschumacher michael for a full and speedy recovery!!!"

British former world champion Jenson Button said posted that his "thoughts are with Michael Schumacher at this tough time. ... Michael more than anyone has the strength to pull through this."

During his career, Schumacher had seven drivers' championships and 91 race wins. After initial success with the Benetton team, Schumacher moved to Ferrari and helped turn the Italian team into the sport's dominant force. After initially retiring in 2006, he made a comeback in 2010 and raced for three years with Mercedes.