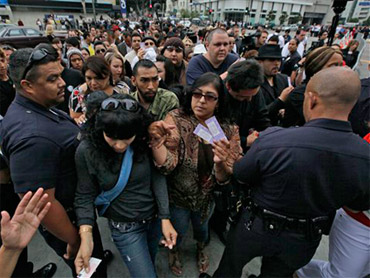 The curtain is slowly rising on Michael Jackson's last show.

As in Jackson's life, Tuesday's public memorial at the downtown Staples Center includes the spectacle surrounding the show - legal drama, screaming fans, star power, live worldwide broadcast, unsavory accusations, even a parade of elephants - all adding up to what could be the biggest celebrity send-off of all time.

Adding to the spectacle is the confirmation from Los Angeles Police Chief William Bratton that Jackson's casket will be taken to the arena. Police blocked off roads and warned those without tickets to stay away because they would not be able to get close to the Staples Center.

On the eve of the memorial, activity was spotted late Monday at the Forest Lawn Cemetery involving the Jackson family. The cemetery is the location where relatives were expected to hold a private funeral.

Sources tell CBS News there was no burial Monday night - at sunset, a coffin believed to be carrying the King of Pop was taken into a building called the Hall of Liberty, which contains a 1,200-seat auditorium.

A few hours later, the casket was reloaded into the hearse and delivered to another nearby building, this time covered in a blue cloth.

More than 1.6 million people registered for free tickets to Jackson's downtown memorial. A total of 8,750 people were chosen to receive two tickets each.

"I got the golden ticket!" one fan screamed out of his car window in a Willy Wonka moment as he drove out of the parking lot.

British Airways reported a surge of bookings as soon as the memorial arrangements were announced. Virgin's trans-Atlantic flights to San Francisco, Las Vegas and Los Angeles were all packed with fans and VIPs, spokesman Paul Charles said.

About 50 theaters across the country, from Los Angeles to Topeka, Kansas, to Washington, D.C., were planning to broadcast the memorial live, for free.

Downtown hotels were quickly filling. Police, trying to avoid a mob scene, warned those without tickets to stay away because they would not be able to get close to the Staples Center.

The LA Visitors Bureau expects a tourism influx could generate $4-5 million in economic activity, reports CBS News correspondent Jeff Glor. But the event will also cost money - at least $2 million for extra police and city services, from a local government already half a billion dollars in debt.

One Los Angeles City Council member is calling on the promoter AEG to pick up the entire cost - not only what happens inside the Staple Center, but also protecting people on surrounding streets.

"I would love for somebody to pick up the entire tab," Acting Mayor Jan Perry told Glor. "That would be GREAT."

Although people without tickets have been warned away from the area, the LAPD is ready for an onslaught of fans, Chief William Bratton told CBS "Early Show" anchor Maggie Rodriguez.

Bratton said there are more police (many of whom are on-duty personnel) deployed today than there were at the Lakers' championship parade last month.

"We really just do not how many people will actually show up, so we're prepared for anything, also prepared to de-escalate very quickly," Bratton said. "This is costing a lot of money, so if we don't get the crowds we are expecting, we will very quickly redeploy our personnel.

"The Lakers parade ended up being paid for private donations, and I know city council members are reaching out to see if business members can help out with this one."

All those involved say the heart of Los Angeles will become a circus. In one way, that characterization will be literal. On Wednesday Ringling Brothers and Barnum & Bailey starts a run at Staples Center, a booking long planned in advance, and in preparation will march elephants from the train station to the arena in the pre-dawn hours before today's Jackson's memorial.

The legal maneuvering that marked Jackson's extraordinary and troubled life also continued Monday, with his mother losing a bid to control his enormous but tangled estate. And in one of the few reminders of Jackson's darkest hours, a New York congressman branded Jackson a "pervert" undeserving of so much attention.

In Los Angeles Superior Court, a judge appointed Jackson's longtime attorney and a family friend as administrators of his estate over the objections of his mother, Katherine. Attorney John Branca and music executive John McClain had been designated in Jackson's 2002 will as the people he wanted to oversee his empire.

Katherine Jackson's attorneys expressed concerns about McClain and Branca's financial leadership. "Frankly, Mrs. Jackson has concerns about handing over the keys to the kingdom," said one of her attorneys, John E. Schreiber.

Branca and McClain will have to post a $1 million bond on the estate, and their authority will expire Aug. 3, when another hearing will be held.

"Mr. Branca and Mr. McClain for the next month are at the helm of the ship," the judge said.

Jackson died at age 50 with hundreds of millions in debts. But a court filing estimates his estate is worth more than $500 million. His assets are destined for a trust, with his three children, his mother and charities as beneficiaries.

Debbie Rowe, Jackson's ex-wife and the mother of Jackson's two oldest children, had planned to attend the memorial but backed out Monday. "The onslaught of media attention has made it clear her attendance would be an unnecessary distraction," her attorney Marta Almli said in a statement.

In New York, Republican Rep. Peter King released a YouTube video calling Jackson, who was acquitted of child molestation charges, a "pervert" and a "low-life."

But the memories of Jackson's problems were far from the minds of fans preparing to say goodbye.

"It's the passing of a great soul," said Matt Tyson, 31, of Ojai, Calif. "He brought people together, helped express something that's in us all."