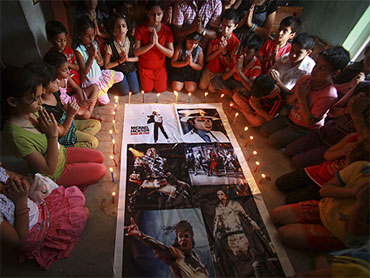 A year after Michael Jackson's death caused a worldwide outpouring of shock, tears and tributes, the anniversary of his passing was being marked Friday on a quieter scale, as fans remembered their fallen King of Pop with vigils, prayer and, of course, music.

Some radio stations woke up listeners to Jackson's music; on U.S. television, all the major networks devoted a portion of their morning news programs to Jackson and more coverage was expected during prime-time hours. Events were planned across the globe, from Tokyo to New York.

Jackson's burial place at Forest Lawn in Glendale. Calif., was expected to draw not only a throng of fans, but family as well.

Jackson died on June 25, 2009, at age 50 as he was preparing for a series of comeback concerts in London. Dr. Conrad Murray is charged with involuntary manslaughter in Jackson's death for administering the powerful anesthetic propofol to Jackson to help the pop star sleep.

In an ironic twist, Jackson's legacy may have actually been strengthened by his death.

"It's certainly safe to say, when people thought of Michael in the months, years, leading up to his death, it wasn't always about the music," said Bill Werde, editorial director of Billboard magazine, told CBS' "The Early Show".

Pictures of Jackson hung on a wall outside New York's Apollo Theater in Harlem, where Jackson and his brothers won amateur night in the late 1960s. A sidewalk plaque memorialized the singer alongside such other legends as James Brown and Smokey Robinson.

Since the Apollo helped launch the Jackson 5, it has had a strong connection to the late pop star. After Jackson's death, it became the de facto gathering place for New York fans. It was an emotional though more low-key scene on Friday morning, as Jackson's music blared from boomboxes and passing cars.

"We are really honored to have played a part in launching Michael's musical career and to serve as a gathering place for people to come and celebrate his lifetime of achievement," said Jonelle Procope, Apollo president and CEO.

Procope placed Jackson's black hat and sequin glove, both from the theater's collection, beside his plaque.

Elsewhere in Harlem, the AMC Magic Johnson Harlem 9 movie theater screened "This Is It," the documentary about Jackson's preparation for his London concerts, throughout the day. And the Rev. Al Sharpton was to lead a moment of silence in the afternoon.

In Gary, Ind., Jackson's hometown, there was to be a tribute at the family home; city officials said they expected Jackson's mother, Katherine Jackson, and his niece, Genevieve Jackson, to show up, along with thousands of others. Katherine Jackson also lent her support to a "Forever Michael" fan event in Beverly Hills, Calif., on Saturday.

But his brother Randy Jackson was hoping to make the official family commemoration at Forest Lawn on Friday morning.

In Japan, hundreds of fans met at Tokyo Tower to honor Jackson with a candlelight vigil, a gospel concert and more. Some got a chance to see a collection of his possessions, including costumes from his tours and even a 1967 Rolls-Royce Phantom that he used to drive around Los Angeles.

"I don't know what to say. Seeing all his things makes it all come back to me," said Yumiko Sasaki, a 48-year-old Tokyo officer worker who has been a Jackson fan since she was 12. "It makes me so sad to think that he is gone. He was wonderful."

About 50 guests paid $1,100 each to sleep overnight at the Tokyo landmark, where they had catered food, watched a gospel choir, looked at Jackson memorabilia and danced to Michael Jackson's music before observing a period of silence as the sun rose.

Fans started gathering at Forest Lawn on Thursday night. Five large wreaths of flowers and dozens of bouquets, drawings and photos of Jackson had been placed outside his private mausoleum.

Evdokia Sofianou, 46, and her 9-year-old daughter, Rebecca, traveled from Athens, Greece, to pay their respects.

"I came because I love Michael very much," Sofianou said Thursday night. "I came to grieve."

But not every memorial for Jackson was to be somber. In France, weekend celebration plans included a concert and tribute show, and clubs across the globe planned parties for the man who embodied dance music.

"They want to celebrate his life and music," DJ Jon Quick said of the expected partygoers at club Taj on Friday, where he would play Jackson tunes. "His albums are like timelines in your life. You can remember what you were doing ... when 'Thriller' came out."