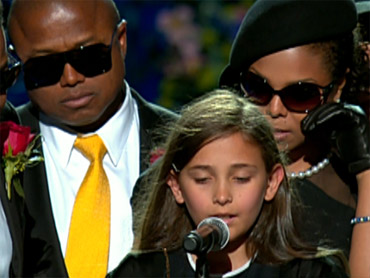 NEW YORK (CBS) On the first anniversary of Michael Jackson's death, the media spotlight remains fixed on the Jackson family.

The pop star, who died one year ago, left behind not only an unparalleled music legacy, but a high-profile family that includes three young children, estranged parents, and nine siblings.

His children, Prince Michael, 13, Paris, 12, and Prince Michael II (also known as Blanket), 8, live in a closely guarded cocoon and have little contact with the outside world.

Their rare public appearances are heavily documented, whether it be the leaked YouTube clip of Blanket reenacting a "Star Wars" scene or Prince and Paris' recent trip to the Electronic Entertainment Expo (aka E3) in Los Angeles.

"They don't have any friends," said their grandmother, Katherine Jackson, in a recent interview with U.K.'s Daily Mirror. "They don't go to school, they have private lessons at home - but that will change in September, when they are due to enroll at private college. But they have their cousins and aunts and uncles around them constantly, and that's helped them immensely."

At 80 years old, Katherine Jackson is the legal guardian of Jackson's three kids. When she is not busy supervising their activities, she is occupied with the administration of her son's estate.

Jackson left his fortune to his mother, children and a few charities. Katherine and the children have been recieving more than $80,000 a month from the estate. His father Joe Jackson, who was omitted from the will and trust, has been getting $15,000 a month and is seeking more.

In an interview with News of the World, Joe Jackson, 80, asserted that his son died as a result of his wife's inaction.

"In Michael's final months alive, I said to her many times that I couldn't get through to him - and that she needed to help her son," says Joe Jackson in the published interview. "I had begged her to go over and stay with him, but she insisted he needed his privacy and gave him the slack she thought he needed."

But despite Joe Jackson's recent accusations, it's Michael Jackson's personal physician, Dr. Conrad Murray, who will be facing the judge.

Murray, 57, was charged with involuntary manslaughter in Jackson's death. He is accused of giving the pop star a lethal dose of the anesthetic propofol last June.

"Michael was constantly surrounded by money-grubbing leeches, and this doctor was no exception. He 100 percent is responsible, as well as a number of other doctors through the years who fed his addiction," Boteach said.

In a court hearing last Monday, a judge refused to suspend Murray's California medical license despite a request by state authorities to ban him from practicing.

Jackson's youngest brother, Randy Jackson, expressed his disappointment in the decision in a statement obtained by E! Online.

"The recent court proceedings have been difficult for us as a family," said Randy Jackson. "However, it is a necessary process that we are well prepared to endure in our fight for justice for Michael."

Randy Jackson, who recently was admitted to the hospital for a suspected minor heart attack, continued to express his frustration - but this time it was regarding his brother's upcoming memorial.

The 48-year-old singer took to his Twitter page to admit that he disagrees with the rest of his family about plans for Jackson's first anniversary service on June 25.

"I see what you see and I don't agree with many of their choices but they are my family and I do love them," he wrote.