Michael Caine portrayed a womanizing rogue in the original version of "Alfie" back in 1966. All these years later, the actor who was born Maurice Micklewhite is still making movies, only now he's using his talent to portray the infirmities of age. Our Sunday Profile comes from Mark Phillips:

"I used to have a beautiful wife and all my own teeth," says Michael Caine's character in the new film, "Is Anybody There?" "Your life changes, Buster, and not always for the better. You accumulate regrets and they stick to you like old bruises."

Caine plays a bitter, old man railing against the onset of dementia. It's another small movie of the sort that the Oscar-winning actor likes to make these days, in which his angry old man finds redemption through the friendship of a young boy.

"What rings the bells that makes you decide what you're going to do?" Phillips asked.

"Yeah, the movies I do now, instead of getting made up, I get made down!" Caine laughed.

It's not like Michael Caine has to work to pay the rent. Now 76 years old, and after being in (he figures) about 125 movies, he splits his time between a luxury riverside apartment complex in London and a spread in the country … pausing to make the occasional movie when he likes the script (such as "The Cider House Rules"), or popping up in irresistibly-well-paying mainstream epics, like the "Batman" franchise.

Caine does remember what it was like to be poor. Poor is what he was when, as a struggling stage actor from a working-class, cockney background, he was cast against type to play an upper-class British officer in his 1964 breakthrough, "Zulu."

"I was playing a cockney, and I went up to play the cockney corporal. I was very, very slim, with long blonde hair. He said, 'You look like an officer, you don't look like a cockney.' And I couldn't understand what an officer or a cockney looked like, but I went along with it. Whatever he said, I was going to go agree with - it didn't matter. And he said to me, 'Will you screen test for Lieutenant Bromhead?' And so I did and I got the part."

"Normally," Phillips notes, "the lieutenant would have been 'posh.'"

"Yes, it would have been a very posh actor, which there was so many about," Caine said. "But it was my appearance that did it. I had very long blonde hair and I was starving to death as an actor so I was very slim."

"Zulu" was an international hit, and Caine had broken out of the class system constraints that had limited his options in Britain. 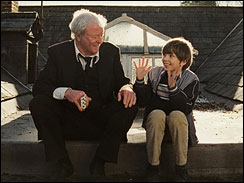 (Big Beach Films)
(Left: Michael Caine and Bill Milner in "Is Anybody There?")

"Becoming a star in America, in a sense, emancipated you," Phillips said.

"Oh, tremendously, yes, and made me a lot of enemies here because they never forgave you becoming a star in America," he said. "They call it selling out: 'He sold out to America, he was doing great Shakespearean stuff here and then he is doing silly movies in America!'"

In fact, the series of hits that consolidated Caine's career all had him playing working class heroes: "The Ipcress File" … "The Italian Job" … and, of course, the biggest working class, misogynist hero of them all, "Alfie."

"The picture that made my name was 'Alfie,' because it went to America and I never thought it would go to America.

"About 6 months after it had been released in England, the director, Lewis Gilbert, rang me and he said, 'It's going to America and the Americans don't know what you're talking about!'"

If imitation is the sincerest form of flattery, the remakes of Caine classics - from "Alfie" to "Get Carter" to "The Italian Job" - are praise indeed.

"Yeah, I mean, you wonder why they do it," Caine said. "But it is sort of a compliment in a way, because it must have been good. But my view is, you should remake a flop."

Which he's done, more than once, such as "Dirty Rotten Scoundrels."

"Yeah, 'Dirty Rotten Scoundrels' was a flop picture with Marlon Brando and David Niven (1964's "Bedtime Story"), which went straight into the toilet. They took the story about these two conmen and rewrote it and so we had nowhere to go but up. And I remade myself 'The Quiet American,' which original picture was a flop."

A career that has produced two Oscars has another distinction. He's been nominated for an Academy Award twice in every decade.

Another distinction is Caine's stable home life. He's been married for thirty-six years to Shakira, a model he spotted in a TV commercial and who appeared in one of his movies, "The Man Who Would Be King,"

"Do you look back and think, 'Well, I was lucky, I was at the right place at the right time,' or, 'I brought something special to that whole period that worked?'"

"I think, first of all, luck," Caine said. "I am the luckiest person I know. My whole career, thinking about where I came from, it's a miracle! I remember a reporter asked me, 'Do you believe in God?' And I said, 'If you'd had my career, you'd believe in God. I said, 'I certainly do!"