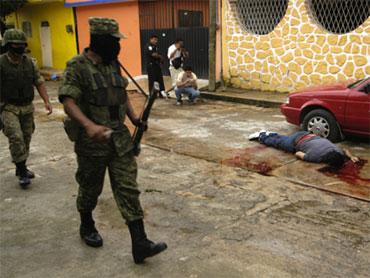 Mexican authorities say seven people were killed in a shootout between rival drug gangs in the Pacific resort city of Acapulco.

The state of Guerrero, where Acapulco is located, has become a drug cartel battleground.

Authorities on Wednesday found the decapitated bodies of two men inside a car abandoned in the community of Kilometro 30, near Acapulco.

Nationwide, more than 28,000 people have died in drug violence since December 2006, when President Felipe Calderon launched a crackdown against drug traffickers.