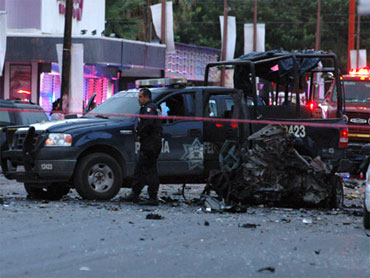 Members of a northern Mexico drug gang rammed a car that may have been packed with explosives or inflammable material into two police patrol trucks in the border city of Ciudad Juarez, killing two officers and a medical technician and wounding nine people.

Federal police said Thursday's attack — which may be one of the first uses of an explosive-packed car in Mexico — was in retaliation for the arrest of a top leader of the La Linea drug gang, Jesus Acosta Guerrero, earlier in the day.

Seven officers and two civilians were wounded, said a state police source who was not authorized to be quoted by name. He said the compact passenger car had apparently been carrying some kind of explosive or flammable device when it rammed the police pickup trucks. The crash left charred wreckage.

Authorities were investigating what caused the vehicle to explode, and Mexico's attorney general said Friday that there was no evidence so far to support local media accounts that a bomb was involved.

"We have no evidence anywhere in the country of narcoterrorism," Arturo Chavez told reporters.

Federal police confirmed in a statement late Thursday that the car rammed the patrol vehicles, but were not immediately available to confirm what, if anything the car was carrying.

Police said Acosta Guerrero, 35, was the "operations leader" of the gang known as La Linea, which works for the Juarez drug cartel.

It said he was responsible for at least 25 killings, mainly of rival gang members, and also ordered attacks on police.

Drug gangs have previously attacked Mexican soldiers and law enforcement officers with grenades and powerful rifles, but seldom have been known to use explosives.

Farther south in Chihuahua state, where Ciudad Juarez is located, gunmen killed the nephew of the governor-elect during a botched kidnapping, authorities said Thursday.

Mario Medina, nephew of Cesar Duarte, was shot in the back Wednesday as he tried to escape from his assailants in the state capital, also named Chihuahua, prosecutors' spokesman Eduardo Esparza said.

Medina, 42, was at his parents' business when the would-be kidnappers struck, Esparza said. Police had not discovered a motive.

More than 1,400 people have been killed in drug violence in Chihuahua state, most of them in Ciudad Juarez, across the border from El Paso, Texas. There have been more than 23,000 killings throughout the country linked to drug violence since President Felipe Calderon deployed thousands of soldiers and federal agents to drug hotspots in late 2006.

In the northern state of Nuevo Leon, authorities said Thursday that the bodies of four men who had been shot to death were found on a street in the affluent Monterrey suburb of San Pedro Garza Garcia.

The victims were bound with tape and blindfolded, the state prosecutor's office said in a statement.

Nuevo Leon has seen an increase in drug violence that authorities say stems from a fight between the Gulf cartel and its former ally, the Zetas gang of hit men.

Mexican and U.S. officials say the Gulf cartel has aligned itself with the Sinaloa and La Familia gangs, which are seeking to wipe out the Zetas in northeastern Mexico.

In the Pacific coast state of Guerrero, police said they found the body of a man whose head and fingers had been cut off.

The body was found in a plastic bag in the state capital, Chilpancingo, and the head was found next to it.

In the coastal resort city of Acapulco, also in Guerrero, drug traffickers left a banner on a boulevard accusing local police of protecting Edgar Valdez Villarreal, a U.S.-born enforcer known as "La Barbie." The banner was signed "B.L.," an apparent reference to the remnants of the Beltran Leyva cartel, which split with Villarreal.

Also Thursday, the Mexican navy reported it found 8 metric tons of a precursor chemical used to make methamphetamines in shipping containers at the Pacific coast seaport of Manzanillo.