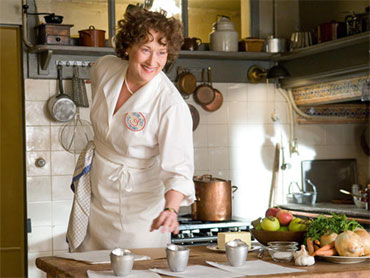 She likes to eat. She likes learning to cook.

Two-time Academy Award winner Meryl Streep said on "The Early Show" Wednesday she has some things in common with her character in her new film, "Julie and Julia."

In fact, Streep said she didn't have to pretend anything when she played legendary television cook Julia Child.

But she wasn't actually playing an historical portrayal of Child, Streep explained.

"In our film, I am a figment of someone's imagination," she said. "Someone, a young woman in 2001 in Queens, (New York), who is cooking her way through Julia Child's cookbook. ... So, in a way, I'm a fantasy Julia Child. That was my out, anyway. I didn't have to be absolutely dead-on."

However, Streep did do some research for the role, on Child's cooking career, including watching her early cooking shows.

"She was 50 when she was starting out, and did her very first show," Streep said. "She looked like an undergrad. She still had all the Julia things, but they weren't outsized and emphasized..."

But can Streep cook herself?

She said she's an "indifferent" cook, but her family likes what she makes.

And she's not the only indifferent cook in her family. Streep's mother had only one cookbook: the "I Hate to Cook" book.

Streep added, "She also had the 'Joy of Cooking,' which was never cracked."

"Early Show" co-anchor Harry Smith commented on Streep's ability to rake in summer movie profits with movies, such as "The Devil Wears Prada" and "Mamma Mia!," comparing her to Will Smith and his box office bonanzas.

"Go figure. It's so alarming," Streep joked. "What's happening to the world?"

Streep added, "It's bizarre, but it's a happy surprise."

Smith said she may even be asked to do car crashes and helicopters next.

Streep responded, "Oh, I don't think they're going to get me in the cat suit. I would pay to avoid that."