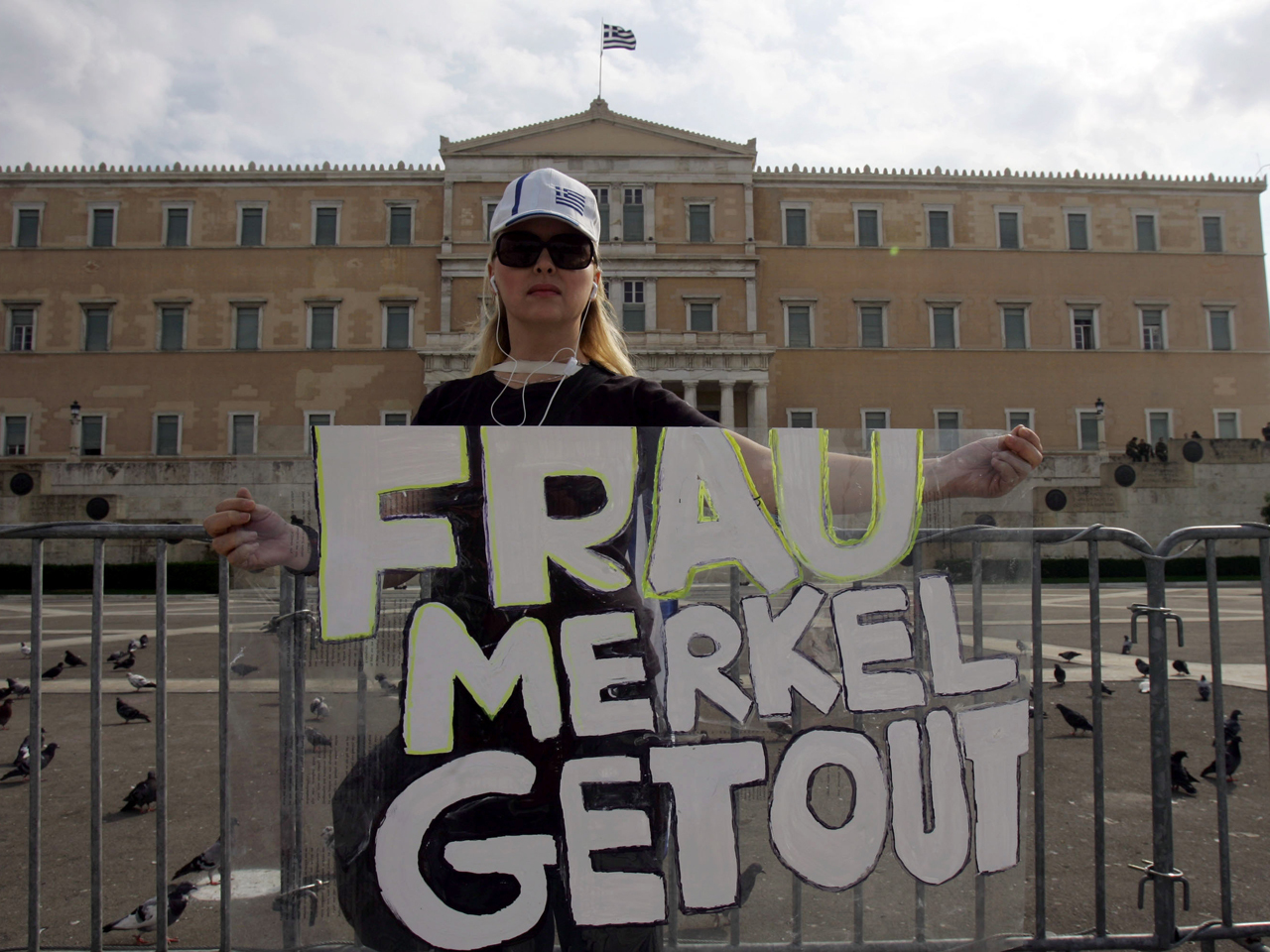 CBS News correspondent Mark Phillips says if Tuesday morning in Athens was playing out in an old Western movie, the wizened old hand might observe that it was simply, "too quiet out there."

After months of occasionally violent protests against the government's austerity measures, Greek authorities have put into place the most stringent security measures seen in years for Merkel's visit.

Phillips reports the usual central Athens battle grounds were sealed off behind steel barricades Tuesday morning — 7,000 police were said to be on duty and public gatherings were banned in the Greek capital. The restrictions were seen as a red flag to the bull of Greek's more dedicated protest movement — the order to stay away has only made them more determined to show up, in force.

An unemployment rate around 25 percent (50 percent for the younger generations) has meant a lot of people are angry and have a lot of free time on their hands. A quiet afternoon in Athens is not in the forecast.

Merkel has said she's coming to show support for the Greek government's austerity measures, more of which are needed if the country is to get its next infusion of bailout cash from the European Union in November.

The Greeks have already received two installments, and the Germans have been the biggest donors for both. But the words "thank you" will not be on Greek lips, notes Phillips.

Merkel has become the personification of anger at austerity in Greece for the job losses and pension cuts Greeks have endured as a means of trying to get public accounts out of the red. Many in Athens say they're being asked to bear a greater burden than elsewhere in Europe and that the poor and middle classes are being hurt most, not the rich and powerful who have hidden their money out of the country.

The German leader is due to arrive in the Greek capital at 1:30 p.m. (0730 Eastern) Tuesday for talks with conservative Prime Minister Antonis Samaras.

Many of Europe's leading politicians have avoided official travel to Greece and the risk of a hostile reception, as the debt-saddled country struggled to keep up with commitments needed to guarantee rescue loan payments and long-term euro membership.

But Merkel accepted Samaras' invitation to Athens despite failure by his government so far to conclude a massive new austerity package. The cuts will save euro13.5 billion ($17.5 billion) but doom Greece to a sixth year of recession in 2013.

Greece's respected Kathimerini daily cautioned Tuesday that "no foreign leader should be afraid to come here."

"Extreme behavior, violence, and exaggerated comments by politicians on TV can achieve nothing to help the unemployed or pensioners and just place the country in a position where it looks bad whatever it does," an editorial said. "Today's visit is crucial and historic. Let us all treat it accordingly."

After months of tough rhetoric, the German chancellor may be preparing her own voters for a more tolerant approach toward Greece ahead of federal elections next year, according to Jason Manolopoulos, author of the 2011 book on Europe's financial crisis "Greece's Odious Debt."

"Given how some other members of the (eurozone) core — Austria, Holland, Finland — had made some very harsh comments ... I think it does send a message to Greece," Manolopoulos said of Merkel's visit.

"But I think it's also important, if not more important, for German domestic consumption."

In Athens, Merkel will meet with Samaras and President Karolos Papoulias, the largely ceremonial head of state, in adjacent buildings before flying back out of the country.

Draconian security measures include a ban on public gatherings outside the German Embassy and other parts of central Athens as well as within 100 meters (330 feet) of her motorcade route from the airport.

Samaras' own partners in his coalition government described the police measures as excessive. And Greece's main labor union, the GSEE, called them a "display of force ... aimed at canceling our democratic rights," insisting it would go ahead with plans to stage a 1:00 p.m. (1000GMT) rally near parliament.

Greece's debt crisis started in late 2009 after it misreported deficit figures, triggering fears that debts in other eurozone countries may also be at risk.

Since May 2010, the country has depended on bailouts from the eurozone and the International Monetary Fund.

But to get the loans, it implemented successive pay cuts and tax hikes, while increasing retirement ages and facilitating private sector layoffs that are expected to push the rate of unemployment up next year to nearly one in every four workers.

"These measures are hitting every Greek family — hurting our children," Nikos Papageorgiou, head of a hotel workers' union in greater Athens, said at Monday night's rally.

"People should not be afraid to protest because of the police measures. No one can deny us the right to ask for a better life."