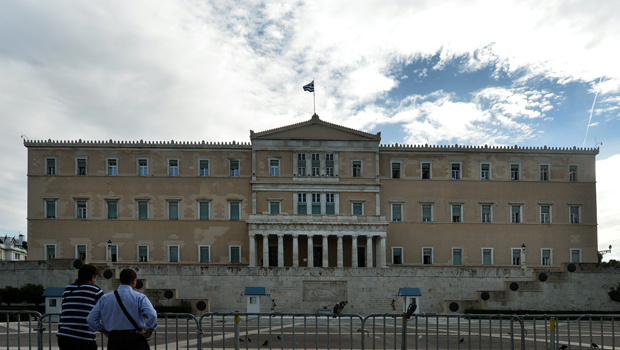 ATHENS, Greece Greek police have increased security and are preparing to close down large sections of the capital Athens to contain protests against Germany's Chancellor, Angela Merkel, who is visiting the city Tuesday for talks with the country's Prime Minister Antonis Samaras.

Merkel's brief visit comes amid growing unrest in Greece over the planned new cutbacks. Greek authorities, who are struggling to talk bailout creditors into unfreezing a vital loan installment, are determined to prevent riots while Merkel is in town on her first visit to the country in five years.

Public Order Minister Nikos Dendias appealed to protesters Monday to "protect the peace, and above all our country's prospects and our international image." Some 7,000 police will be on duty for the visit.

Police have banned public gatherings in much of the city center from early Tuesday and in a 100-meter (110-yard) radius from the route Merkel's motorcade will follow.

A police spokesman said the ban will not affect two separate protests called by labor unions and opposition parties elsewhere in the city but will include the German embassy, where a populist right wing party has called an evening demonstration Tuesday.

Greece has depended on bailouts from fellow countries in the 17-country group that uses the euro and the International Monetary Fund since May 2010. To get the loans, it implemented a series of deep income cuts and tax hikes, while increasing retirement ages and facilitating private sector layoffs.

However, Athens must pass further cutbacks worth â,¬13.5 billion ($17.5 billion) over the next two years to qualify for its next rescue loan payment - without which the government will run out of cash next month.

Germany has contributed the most money to Greece's bailouts, compared to the other eurozone members, because the size of its economy means it pays the largest amount to the region's rescue funds. However it has also been Athens' strongest critic, insisting that Greeks take on more austerity measures and reforms to right their economy and remain solvent.

Samaras has strongly welcomed Merkel's visit, warning against violent protests. Meanwhile, Merkel said Monday that she would remind Greece of Europe's expectations for painful economic reforms during her visit.

Following a political meeting in Bonn, Merkel said Monday that she expects "constructive and friendly discussions in the light of expectations that we have of Greece" when she meets with Samaras and other officials on the one-day visit.

Merkel's spokesman Steffen Seibert said the chancellor appreciates steps Greece has taken but will make clear "what still has to happen."

But he insisted that "with her visit, the chancellor is in no way anticipating what the troika will deliver."

"I cannot speak of presents here - everything that has to be decided will have to be decided when we have the foundation of data that the troika report will deliver," he said.

The main Greek private sector GSEE union deplored the police protest ban as "unprecedented, undemocratic," saying much of central Athens has been designated "a forbidden city."

GSEE said that on Tuesday unions planned "a dynamic and determined answer to plans by Merkel and the powerful in Europe that are dictated by our creditors and adopted by the government."

Earlier Monday, more than 300 pensioners marched on European Union offices in Athens, where they burnt an EU flag in protest of the latest round of austerity measures.