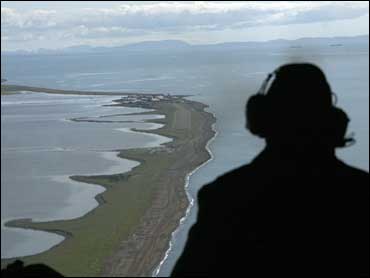 Rapidly melting ice on Alaska's Arctic is opening up a new navigable ocean in the extreme north, allowing oil tankers, fishing vessels and even cruise ships to venture into a realm once trolled mostly by indigenous hunters.

The Coast Guard expects so much traffic that it opened two temporary stations on the nation's northernmost waters, anticipating the day when an ocean the size of the contiguous United States could be ice-free for most of the summer.

"We have to prepare for the world coming to the Arctic," said Rear Adm. Gene Brooks, commander of the Coast Guard's Alaska district.

Scientists say global warming has melted the polar sea ice each summer to half the size it was in the 1960s, opening vast stretches of water. Last year, it thawed to its lowest level on record.

The rapid melting has raised speculation that Canada's Northwest Passage linking the Atlantic and Pacific oceans could one day become a regular shipping lane. And there is a huge potential for natural resources in a region that may contain as much as 25 percent of the world's undiscovered oil and gas.

But scientists caution that it could be centuries before the Arctic is completely ice-free all year round.

Still, conservative estimates indicate the Arctic Ocean will be ice-free in the summer within 20 years, although some scientists believe that will occur much sooner.

As it thaws, the receding ice has made ocean travel along Alaska's northern coast increasingly alluring, but ships can still be trapped by ice.

Earlier in August, three oil industry vessels bound for Canada became stuck in ice about 60 miles north of Point Barrow. The Coast Guard sent the icebreaker Healy to help, but before it could arrive from 300 miles away, the wind shifted and pushed the ice apart, freeing the vessels.

"They were able to get away," Brooks said. "The problem with this ice is it's very unpredictable."

Because of such risks, the Coast Guard established temporary bases this month in Barrow, the country's highest-latitude town, and at the North Slope's Prudhoe Bay, the nation's largest oil field. The bases will operate for a few weeks while Guard officials evaluate the need for the agency's services.

The Northwest Passage is also increasingly popular with tourists.

Chuck Cross has been leading excursions to the North Pole with his Bend, Ore.-based Polar Cruises since 1991, and he's noticed a big change over the years.

"It's amazing to me when I go to the pole how thin the ice is, huge open spots of water in some areas," he said. "Before, you spent more time getting there and more time in the ice. We'd have helicopters looking for breaks in the water for us."

The thaw has added urgency to the race among neighboring nations to claim a piece of the North Pole's resources. The U.S. is compiling mapping data that could bolster any claims for drilling rights.

Many countries have launched scientific expeditions, hoping to take advantage of a provision in international law that allows nations to claim rights over their continental shelf beyond the normal boundary of 200 nautical miles, if the claim can be supported with geologic evidence.

The Coast Guard is concerned that the increasing volume of ship traffic brings greater potential for oil spills, lost boaters and other mishaps.

"We have to ask ourselves whether we're prepared for these ships coming to our shores," said Mead Treadwell, who chairs the U.S. Arctic Research Commission. He testified in Congress this summer about the need to build new Coast Guard icebreakers to better protect traffic in its Arctic waterways.

Before the Coast Guard opened its base in Barrow, the nearest station where ships could stop for fuel and provisions was Alaska's Kodiak Island, almost 1,000 miles away.

Richard Glenn, an official with Arctic Slope Regional Corp., a Barrow-based company that represents the business interests of Alaska Natives, said the Coast Guard's arrival in his community is "like bread to starving people."

"When everything goes wrong - fall-time storms, tragic loss of vessels, lost people on land - there's nothing that's ever been so far away than the Coast Guard."

The town of 4,000 people has welcomed the agency and even supplied hangers for two helicopters.

But the warming climate has also disrupted an ancient way of life for many in the region, particularly hunters who use the floating ice as platforms for hunting marine mammals like bowhead whales and walrus. The same ice is vital to survival of polar bears, which are the first species declared as threatened because of climate change.

Snow also thaws much earlier each spring than in the past, meaning hunters can't travel as far along the tundra after it turns soggy. And the late arrival of fall affects weather patterns, creating dangerous sea currents and strong winds.

To adjust, Arctic communities hold later hunts, take smaller whales and share their food with others who have less to eat.

"It's affecting our hunting practices in more ways than one," said Harry Brower Jr., chairman of the Barrow-based Alaska Eskimo Whaling Commission. "If you take a step back and look at it, you definitely see the changes."

The head of the Coast Guard, Adm. Thad Allen, carefully avoids the debate over climate change. It's too early to say what the Coast Guard's future operations here will be, but Allen is certain his agency will have a key role as the Arctic landscape is transformed by warmer temperatures.

"I'm agnostic to the science and the debate about what the cause is," he said. "All I know is there's water where there didn't used to be."