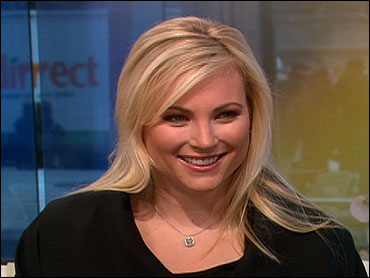 (CBS)
Sen. John McCain's daughter Meghan McCain, who has crafted an image for herself as a voice for young Republicans, took on Sarah Palin and the Tea Party movement on ABC's "The View" on Monday.

Palin's recent statements regarding the use of the word "retarded" represent "exactly what is wrong with politics today," McCain said.

Earlier this month, Palin, John McCain's 2008 vice presidential running mate, said that White House Chief of Staff Rahm Emanuel should be fired for an incident in which he referred to a group of liberals as "F-ing retarded." However, when conservative talk radio host Rush Limbaugh repeatedly used the word "retard" in a pejorative manner on his radio show, Palin chided the incident but on "Fox News Sunday" this week dismissed it as satire.

Meghan McCain took issue with Palin's seemingly hypocritical stance. "We can't placate and say Democrats can say one thing and Republicans can say another thing," she said.

McCain also took a shot at the Tea Party convention, where Palin was the keynote speaker last weekend. The convention also featured former Rep. Tom Tancredo (R-Colo.), who said in his speech, "People who could not spell the word vote or say it in English put a committed socialist ideologue in the White House -- name is Barack Hussein Obama."

"And I think it's why young people are turned off by this movement," she said. "And I'm sorry [but] revolutions start with young people. Not with 65-year-old people talking about literacy tests and people who can't say the word 'vote' in English. It's ridiculous."