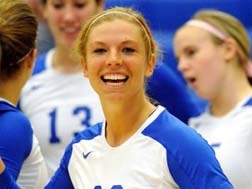 Boken, a native of Wheaton, Ill., was later declared dead at a hospital.

No arrests had made been made or charges filed as of Monday afternoon. Investigators were still scrambling to sort out witness accounts of the shooting with hopes of reviewing surveillance footage from the neighborhood.

Marzullo said there was no evidence Boken knew her assailant.

"We don't know whether the suspect was in the vehicle and got out and shot her or if he opened the door and shot her. There are conflicting statements," Marzullo said. But "we are investigating this as an attempted robbery."

Boken, who graduated from Saint Louis University last year, was shot roughly two miles from where she was to play that afternoon in an alumni game on the university's campus.

Boken was talking to her mother when "the phone went static" about the time of the gunfire, her former coach, Anne Kordes, told the Chicago Tribune. Friends grew nervous after Boken failed to appear for the game and they learned from her mother that "something weird happened" during their phone conversation, Kordes said.

Boken's family described her in a statement as "a wonderful and beautiful human being loved by everyone she met" and said "the family and the community are devastated by this senseless tragedy."

"The family asks that you keep Megan and them in your thoughts and prayers and respect their privacy at this time," the statement added.