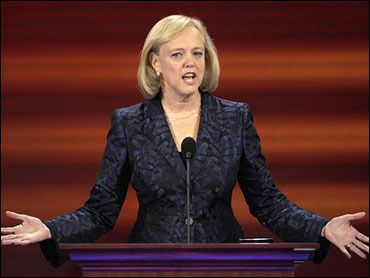 Former eBay CEO Meg Whitman, California's Republican candidate for governor, has spent more than $99 million on her campaign so far, the Associated Press reports, in what could become the most expensive gubernatorial race in history.

By contrast, her Democratic opponent, California Attorney General Jerry Brown, has spent $450,000 on his race to date -- 220 times less money than Whitman.

The former chief executive has given her campaign $91 million of her own money, the AP reports. She also reported raising $3.3 million from outside sources in the six weeks prior to June 30. Brown raised slightly more than $2.6 million in that period.

Brown, however, has the advantage when it comes to cash on hand: He has $23 million while Whitman has about $10.3 million.

Additionally, Brown has the support of union-backed groups that are investing heavily in the race. California Working Families, for instance, reportedly spent nearly $4 million in ads on his behalf in six weeks.

The latest poll from the Public Policy Institute of California showed Brown leading Whitman 37 percent to 34 percent. A quarter of respondents were undecided.