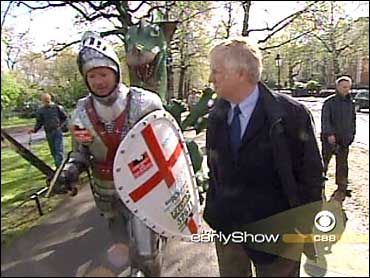 Eight days after the London Marathon began, a man dressed in some very heavy metal finally dragged himself and his pet dragon across the finish line.

For those keeping score at home,

reports
Mark Phillips, it was the slowest marathon ever — and perhaps the greatest amount earned in one stunt for charity.

The man on the mission was Lloyd Scott, aka St George, and his heavy, reluctant dragon, Derek, who finally finished their route in front of Buckingham Palace.

If the problem for Scott until now had been weight and friction, the danger near the finish on Monday morning may have been rust.

Asked about that by Phillips, Scott responded with a laugh, "I don't really care, to be honest, if it falls apart around me."

And, observes Phillips, you need a gimmick to get peoples' attention these days.

Still, there's a cost-benefit equation in this sort of thing — and 26 hard, slogging miles later, Scott still wasn't sure this was such a clever idea, after all: "I think after about three steps into the race, I thought that it was too hard."

Scott had started out a week ago on April 23 knowing it wasn't going to be easy. He slept in various London landmarks along the way. There was pain, there was exhaustion — and there was dogged determination to finish. He simply would not give up.

"In the end," Phillips suggested, "it came down to willpower, I suppose, more than anything else."

"Yeah," Scott replied with a chuckle, "a certain amount of that, and several painkillers each day, I suppose."

The reward for his efforts, Phillips points out, was just shy of 2 million British pounds, which is several dragon's breaths beyond $3 million, U.S., for "eight hard days knight's work."

Next possible stop for Scott: the Chicago marathon in late October.

Oh, and the winner of the London Marathon finished in a little over 2 hours, 6 minutes.