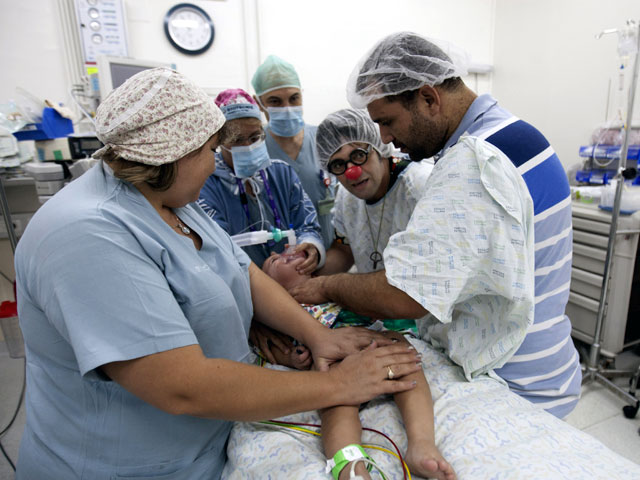 (AP) JERUSALEM - Doctors in Israel are beginning to believe in the power of clowning around.

Over the last few years, Israeli clowns have been popping into hospital operating rooms and intensive care units with balloons and kazoos in hand, teaming up with doctors to develop laughter therapies they say help with disorders ranging from pain to infertility.

This is not how things are done in most of the world's hospitals. Clowns often visit pediatric wards to cheer up young patients, but in most places the clowning ends where the medicine begins. When it comes time for a child to get a shot or go under the knife, the clowns step aside.

Israeli clowns thumb their shiny red noses at that approach. They quote studies which suggest that a clown's participation in treatments can help patients - especially kids - endure painful procedures and speed their healing.

They say it's time for the medical community to recognize medical clowns as legitimate paramedical practitioners, like occupational or physical therapists.

Israel's hospital clowning guild, Dream Doctors, founded 10 years ago, is the leading advocate for infusing more medicine into the artistry.

"It's not just putting on a red nose, floppy shoes, and playing a ukulele," said Dr. Arthur Eidelman, recently retired chief of pediatrics at the Shaare Zedek Medical Center in Jerusalem, and chair of the Dream Doctors' scientific committee. "We see medical clowns as an integral part of the health care team."

On a recent morning at the Jerusalem medical center, one such clown cut short his coffee break when a nurse called to say a boy was being wheeled into surgery to fix a ruptured eardrum.

Dr. Sababa - which translates to Dr. Groovy - rushed up the stairwell and through the double doors into pre-op, greeting Aaron Marziano, 13. They'd met earlier that morning in the pediatric ward, where he'd performed imaginary surgery on the boy's ear with a long kazoo.

"What's your favorite dream?" the clown asked Marziano among a group of nurses, prepping him with guided imagery before sedation. He quickly stretched nets around his floppy green shoes, threw on blue scrubs, and helped wheel Marziano into the operating room. The clown, not the anesthesiologist, placed the anesthesia mask over the boy's face.

"Eight years ago, going in the operating room was science fiction," said Dr. Sababa, who answers to his real name, Avi Cohen, when he's out of his polka-dot necktie and grapefruit vest.

Today, he estimated, a clown is present at about one out of five of the hospital's full anesthesia surgeries for children. A study led by doctors there found that a clown's presence in pre-op reduces the amount of anesthesia administered and speeds up a patient's recovery time.

It's one of a half a dozen studies the clowns and their physician advocates have conducted in recent years, a campaign to prove to the medical community that their therapies are working.

One Israeli study, published last year in a leading reproductive science journal, Fertility and Sterility, suggested that a woman's chances of getting pregnant after in-vitro fertilization rose from 20.2 percent to 36.4 percent if a clown was brought in to entertain and relax her immediately after the obstetrician implanted a fertilized egg.

Of the 219 women who participated in the yearlong study, about half received a surprise visit by a clown dressed as a bumbling chef. Dr. Shevach Friedler of Assaf Harofeh Medical Center said his study indicated that the laughter therapy might reduce stress or strengthen the immune system in the womb to increase the success rate of the treatment.

Another study, conducted by the head of pediatrics at a northern Israeli hospital, found that if there was a clown in the room, children with urinary tract infections didn't need sedation to keep still during an imaging scan. The clown would make a deal with a young patient that both would simply freeze during the scan. It worked: Out of 142 children studied, 137 did not need sedation, eliminating the risks of complications and side effects that often come with sedatives.

"In the last one or two years, there (has been) hard science, evidence-based data, generated that this does make a difference," Eidelman said.

About 25 Israeli medical centers keep professional clowns on hand. One Israeli university offers what it calls the world's first full-time degree program for medical clowning, part of an effort to standardize training for the profession.

Israel's clowns and their physician partners are presenting their studies in international medical conventions and meeting with hospital administrators around the globe.

In the U.S., reactions to the Israeli clowning philosophy are mixed.

Besides, he said, many Americans simply can't stand clowns.

"The term itself carries a whole lot of baggage here," he said. "The term 'clown' has a connotation of Bozo, or less of a professional ... you say medical clown, and I say, what the heck does that mean?"

"I want both worlds. I want the world in which the medical clown is an extension of the medical team . and the ability of a medical clown to be an artist. To be able to stand in the doorway, in a clinic, not knowing what's going to happen next," Christensen said.

In Europe, Eidelman said, hospitals are more willing to let clowns incorporate the Israeli approach into their acts. This summer, clowns from Holland, Brazil, Germany, Russia, the U.S. and Canada shadowed Israeli clowns at a hospital in the northern city of Haifa.

One Dutch clown peeked into an examination room where her Israeli colleague hopped up onto an examination table next to a wailing child with a needle in his arm. The Israeli clown inflated a white medical latex glove into a makeshift balloon animal.

The boy's shrieks turned to giggles.